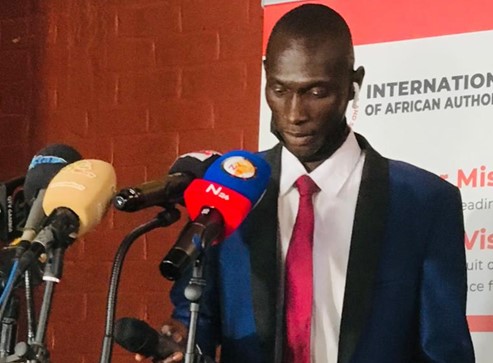 The advent of technology in this generation has badly affected the culture of reading in many countries including The Gambia.

As a way of rejuvenating that culture Alieu Jobe, Head Boy of Nusrat Senior Secondary School has over the week urged his fellow pupils to adopt the culture of reading good books, noting that books give the reader knowledge and wisdom.

Jobe was speaking during the launch of the book “Don’t Judge the Book By The Cover” at Ebujeng Threate in Kanifing.

The book was written by Gambia’s Award-winning author, Modou Lamin AGE-ALMUSAF Sowe and launched as members of the International Association of African Authors and Scholars celebrated 15 years of The Gambian Literature.

According to Alieu Jobe technology has led to many students becoming lazy when it comes to reading books, adding that the use of google and other software in learning can only give the user knowledge and not wisdom.

“I am calling on all the students to adopt the culture of reading books. We have great writers in Africa and their books are very important. As students, we must be ready to read as much as we can because we are the leaders of tomorrow,” Alieu Jobe noted.