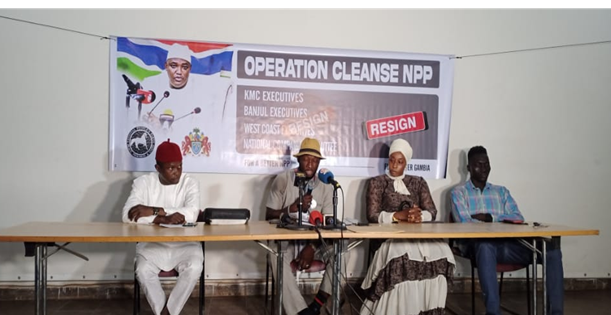 A Movement within the National People’s Party dubbed ‘Operations Cleanse NPP’ has launched a movement calling for the resignation of party regional executives after the party’s dismal performance in the Kombos in the recent National Assembly elections.

Led by Fanding Baldeh as the chairman, the group conveyed their dismay over the outcome of the recent parliamentary election. Fanding, who read the statement on behalf of the movement, said the dismal performance was a result of the incompetence of the regional executives of the party, thus calling for the resignation of all regional executives in Banjul, Kanifing Municipal Council and West Coast Region.

“We can’t sit with our hands crossed. The difference between the presidential election and NA elections is huge. Members of NPP and not happy.  We are here to express our disappointment and called for the President to dismantle the regional executive. The selection of the leadership was not proper and this brought disunity to the leadership.  The selection of incompetent people led to the dismal performance of NPP in the National Assembly elections.”

He called for the restructuring of the party.

According to Fanding Baldeh, the movement is created after consultation with party members across the length and breadth of the country. He explained that the movement is not formed to witch-hunt anybody but to strive for the interest of the party.

He ordered the party Secretary-General and the president of the Republic of The Gambia, Adama Barrow to organise a huge rally immediately after Ramadan to speak to the militants and reassure them of a better future.

Ousman Di Mansa Kujabi, who is serving as a media assistant to the movement branded the regional executive as a bunch of incompetent individuals who are there to enrich themselves. Mister Kujabi said that selection of candidates in many areas was done unfairly.

He accused the regional and ward executives of the party of their dismal performance in the Banjul, KMC and West Coast Region in the April 9th parliamentary election.

“Lots of things didn’t go right. This has never happened in the country for an incumbent party to win only one seat from Banjul to Kalagi. Some of the candidates lost their seats because most of the party’s regional executives are not living up to expectations.

Di Mansa Kujabi asserted that the President should close the party Bureaus until after the party’s congress because they are not working in the interest of the NPP. He noted they will lose the chairmanship position in the local government elections if things didn’t change.

The movement repeatedly said that they are still pro NPP but launched the movement to prevent the party from extinction.

It could be recalled that the National People’s Party won only one seat in Region one and two combined. This happened for the first time in the history of the country for a ruling party to win only a seat in the Kombos.