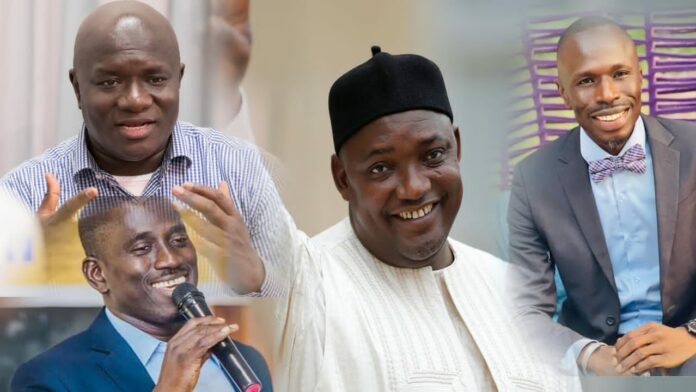 A Gambian man believed to be an NPP supporter has called for the arrest of Momodou Sabally, Madi Jobarteh, and GDC youth President MC Cham Jr. The man, in a widely circulated WhatsApp audio, said the trio poses a threat to the security of the country and must be arrested by the government for peace to reign. The man further stated that The Gambia will be peaceful once the trio are silenced, citing the arrest of comedian Alhagie Muhammed who was recently arrested by the police and charged with incitement of violence following his infamous Facebook live where he caricatured the first family.

“These three people, Madi Jobarteh, MC Cham, and Momodou Sabally, once these people are silenced the country will be peaceful. These three are hellbent on destroying this country. The ban on Momodou Sabally from working in the civil service is the anger he has been harbouring. He will never be quiet. Am not saying he should be attacked but he should be put in custody for more than six months.’’

The GDC National Youth President and social commentator MC Cham has since reacted to the widely circulated audio. Cham said not only is it shameful but dangerous that utterances like these are coming from someone who supports the ruling government, saying the days of using fear tactics to silence the opposition or government critics are long gone.

“I will continue to talk and hold the government accountable. I have never condoned violence. All my criticisms which I believe are constructive have been centred on how to develop the key sectors of our economy. What I am fighting for is for the endless corruption to stop, and for the standard of living of Gambians to improve. I am fighting for his right and mine. I am empowered by the Constitution to talk, and I will continue to do so. I will continue speaking on Gambia’s interest and will not be silenced.’’

Economist and former Secretary-General Momodou Sabally said the threats are nothing new to him as he accused the Gambian President Adama Barrow of showing subtle dictatorial tendencies.

“This is not the first time NPP stalwarts have issued threats against me and MC Cham in particular. Their regional chairman for URR once made threats that I should be physically attacked when I visit any Sarahulleh settlement. These threats have only emboldened me and further motivated me to amplify my voice against the rampant corruption and mindless incompetence of this NPP government.’’