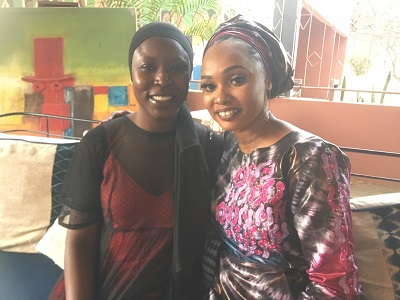 A 34-year-old Gambian female author Aisha Jawara who hailed from the Upper River Region (URR) has launched her new book titled “Now We Run” at a ceremony held at Alliance Franco over the week.

The book tells the story of a young lady who was living a difficult life until she changes her way and become successful.

Aisha said she was inspired to be a writer at the age of 13 when she had a mathematics assignment to do and was forced to go to a library, but she got distracted after reading a book titled “Narnia” written by C.S Lewis.

“Since that day I convinced myself that I will be a writer and I developed the habit of reading different books,” Aisha told The Fatu Network.

She has written four books that are accessible online. The young writer challenged women to read books and change their narratives.

“The concept of the book is about someone who has been trusting something she has no idea about and she has been innocent.

Because of the past evil done by her parents it turns back to her making life difficult and she has to run away from dangerous people and move on to start a new life,” she explained.

The thirty-chapter book is edited by Haddy Dibba who described the book as a true reflection of the new generation and what people are going through.

Haddy also urged her fellow females to embrace Aisha in reading and writing. “If you want to travel the whole world and you don’t have the money you can read books,” she added.

Saikou Drammeh, country manager of DHL international, who was in attendance at the book launch said he is inspired by the content of the author.

He added that young men and women in the country would be able to draw inspiration from the book.

“I encourage my fellow Gambians, particularly the youths to read and learn more because the importance of knowledge cannot be overemphasized.

“If Aisha can write a book that touches people’s hearts, why not others?

“In many societies, women are not allowed to further their education and to see a young girl like Aisha breaking the barries is really commendable,” Mr Drammeh emphasized.

He urged people to give a helping hand to young people like Aisha who are willing to change the world through storytelling.

“I believe there are young men and women in The Gambia who are willing to learn and if they are given the opportunity they can have a great impact in the country,” he noted.

The book launch was attended by several prominent personalities including Honorable Billay G Tunkara the majority leader, and Essa J Conteh, the representative of the Jimara constituency among other businessmen and women who commended Aisha for sharing her knowledge through storytelling.

Teenager in hospital after being pummelled by mob; mother seeks support for treatment

Sports Minister – ‘We consider 2022 as the most successful year...

Three in court over alleged disobedience of court order

Barrow promises to never turn away from the Constitution