‘Not guilty as charged’: Donald Trump is acquitted on two articles of impeachment bringing four-month trial to an end 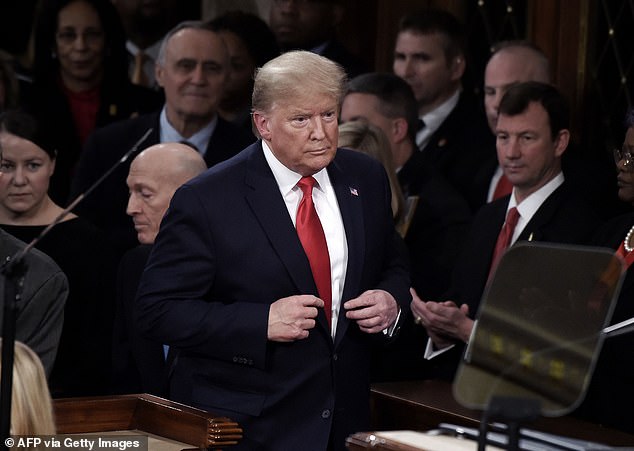 Donald Trump was acquitted on the two articles of impeachment against him on Wednesday, bringing a four-month fractious trial and inquiry to a close.

The final outcome was an almost certainty in the Republican-controlled Senate where it would have taken a two-thirds majority to remove him from office.

Chief Justice John Roberts presided over the the two votes – one for each article – and instructed senators to vote ‘guilty’ or ‘not guilty,’ which is different from the usual ‘yeah’ or ‘nay’ lawmakers say.

The clerk of the Senate called out each senator by name so each could vote, one by one. At the end of each vote, Roberts pronounced Trump ‘not guilty as charged.’

On the first article, abuse of power, 48 senators voted guilty and 52 found the president not guilty.

For the second vote, on obstruction of Congress, 47 senators voted guilty and 53 voted not guilty.

With the votes concluded, Roberts gave the final judgement.

‘The Senate having tried Donald J. Trump – president of the united States – upon two articles of impeachment exhibited against him by the House of Representatives and 2/3 of the senators present not having found him guilty of the charges contained therein, it is therefore order and judged that the said Donald John Trump be hereby acquitted of the charges in the said articles,’ Roberts pronounced. (DailyMail)