No Fuel, No Problem: Cross-border Traders Rely On Horse & Donkey Carts In The Midst Of Fuel Crisis 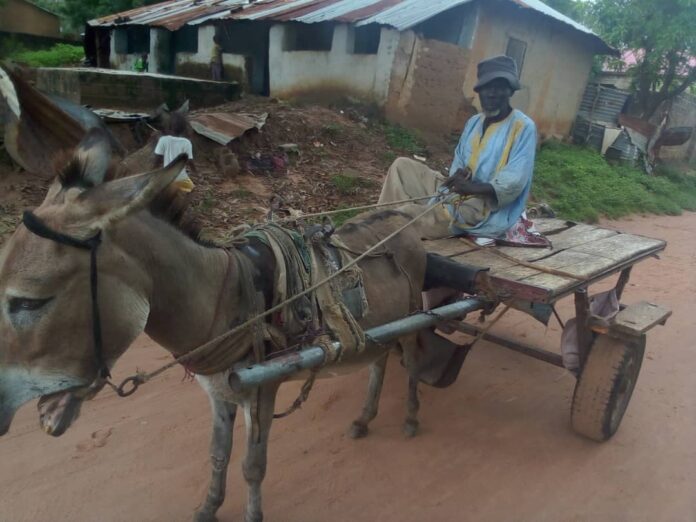 Cross-border traders around Farafenni and the border villages have started using donkey and horse carts as an alternative means of transportation as the recent fuel crisis across the country triggered an unstable increase in transport fares.

Traders have said donkey and horse carts are cheaper compared to commercial vehicle fares. The increase in fares reduces their profit as their expenses are often more than their earnings, thereby affecting profit.

“People carrying their goods to Farafenni use our horse and donkey carts to cross over from the Northern part of Senegal to the Gambian territory. The vehicles have no fixed fares. Taxi and other commercial vans charge differently. The donkey and horse cart owners charge cheaper,” Ebrima Jammeh, a native of Farafenni said.

Throughout the world, donkeys and horses are used as pack animals carrying loads on their backs. This is a cheap and easy way of transporting goods, especially over rough and hilly terrain.

“We have to rely on donkey and horse carts because the fuel situation in the country is not stable. Drivers keep demanding for the increase of transport fares and now fuel dealers are also agitating for an increase in fuel price,” Lamin cham revealed.

Border trade, in general, refers to the flow of goods and services across the border between different jurisdictions. In this sense, border trade is part of the normal trade that flows through the ordinary export/import legal and logistical frameworks of nations and smaller jurisdictions. However, border trade specifically refers to the increase in trade in areas where crossing borders is relatively easy and where products are significantly less expensive on one side of the border than the other – often because of significant variations in taxation levels on goods.

“It’s advantageous to us because no fuel is required for carts. They are also capable of carrying heavy loads. I sell second-hand clothes at the border settlements in Senegal. The day fuel stations were not selling, I use a donkey cart to get to my selling points,” Modou Bobb said.

In a globalised world where goods often cross borders many times as both intermediate and final products, trade facilitation helps lower overall trade costs and increase economic welfare, in particular for developing and emerging economies.

“I don’t wait for commercial vehicles to transport my goods. Sometimes I do make agreements with drivers to carry my vegetables, but they fail me with reasons I cannot understand,” Bajen Samba narrated.

Compared to horses, donkeys show a limited fear response to novel situations, and this can be mistaken for stubbornness rather than fear.

“I owned a donkey cart which I use to transport goods for traders across the border to the Gambia. It’s a bit challenging on the road but I manage to deliver service satisfactorily,” Bai Joof said.

Donkeys can pull carts faster than oxen provided the roads are well maintained. Some farmers living on good roads are using donkey-drawn carts for transporting construction materials such as sand, gravel and stone and for transporting their produce from the field to their homes and the market.