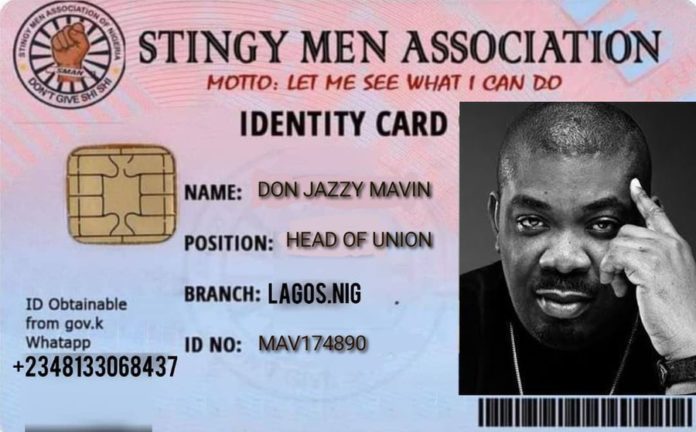 SMan, which stands for Stingy Men Association of Nigeria, is trending on Twitter in Nigeria as more and more Nigerian celebrities share mock-ups of membership cards for the group.

A tweet by music producer Don Jazzy of his own card has been retweeted more than 11,000 times.

Tweeters have been joking about creating an anthem, a headquarters and an oath.

It is unclear to us how the trend started in Nigeria. The idea has already been spreading around Africa.

Back in December, a supplement to Uganda’s Daily Monitor published an article outlining a proposed constitution for the Ugandan arm of the group.

In that article, Ian Ortega wrote: “This constitution drafted in the year of the Pandemic will for generations to come define the meaning of austerity.”

Some parts of the his “constitution” hit out at girlfriends asking their boyfriends for money.

“Any daughter of Eve that asks for money shall be treated as an illegal immigrant and be labelled; ‘not wife material,’” he wrote.

He went on say that “a member must feel no shame whatsoever in rejecting any monetary request presented to him.”

This includes requests for money for transport or airtime.