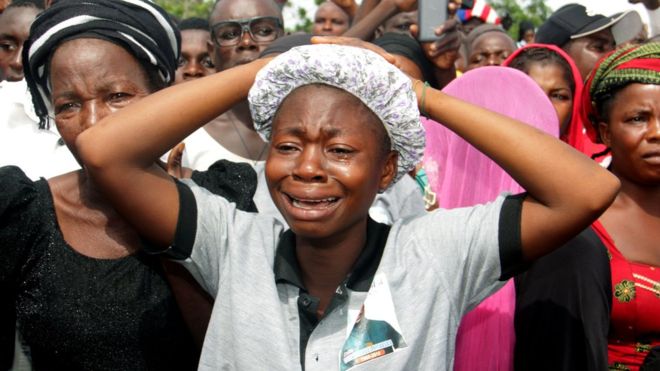 Nigeria’s army has called for the closure of Amnesty International’s operations in the country.

In a report on Monday, the human rights group said at least 3,641 people had died in clashes between farmers and herders in Nigeria since 2016.

The army has accused Amnesty of trying to destabilise the country with “fictitious” claims.

A spokesperson for Amnesty told the BBC that the group “would not be discouraged” by the military’s remarks.

The exchange of words comes days after Nigeria’s military briefly suspended the activities of the UN children’s agency Unicef in the north-east of the country.

Aside from those killed, thousands of people have been displaced since 2016 as a result of the long-running conflict between cattle herders and farmers in central Nigeria, according to Amnesty.

The NGO said more than half of these deaths had occurred in 2018 alone.

“These attacks were well planned and co-ordinated, with the use of weapons like machine guns and AK-47 rifles,” said Osai Ojigho, Amnesty’s Nigeria director.

“Yet, little has been done by the authorities in terms of prevention, arrests and prosecutions, even when information about the suspected perpetrators was available,” she added.

“The Nigerian government has displayed what can only be described as gross incompetence and has failed in its duty to protect the lives of its population.”

On Facebook, army spokesperson General Sani Kukasheka Usman hit back at Amnesty, accusing it of spreading “fictitious allegations” to “destabilise and dismember Nigeria”.

General Usman also called for the closure of Amnesty operations in the Nigeria “if such recklessness continues”.

In response, Isa Sanusi, a spokesperson for Amnesty in Nigeria, told the BBC: “They should do their job of protecting Nigerians rather than threatening human rights organisations.

“We will not be discouraged,” added Mr Sanusi. “Where we see a violation we will not keep quiet.”

Central areas of Nigeria have witnessed decades of violence between farmers and cattle herders.

The International Crisis Group says that in the first half of 2018, six times more people were killed during clashes than in the war with the Boko Haram Islamist group.

The mostly Muslim Fulani – believed to be the world’s largest semi-nomadic group – herd their animals across vast areas, frequently clashing with farming communities.

Since many farmers in the areas affected are Christian, the conflict has often been viewed as an ethno-religious struggle.

Amnesty says the conflict is largely about access to land and resources but has become heavily politicised.

Fake pictures circulating on social media of alleged violence are also believed to be raising tensions.

Nigeria’s President Muhammadu Buhari – the son of a Fulani chief – has previously been criticised for his handling of the issue.