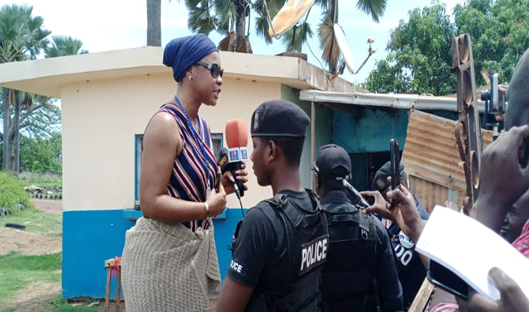 Nanneh Frade Gomez, country representative for Global Homes for Medical Mission (GHOMM), has threatened to sue the Gambian government for stepping into a land which the court had ruled to be hers.

“I don’t know what authority the president has to come and perform such an action, but let’s see if he himself will be in contempt because if the president without our invitation, he will be trespassing. We will make sure we take him to court and file contempt proceeding against him because nobody is above the law.”

Gomez in a press briefing held at the former Anti-Crime unite in Bijilo said that the government plans to lay a foundation for a said multimillion-dollar OIC Hotel in July 2022, which she claimed would be contempt of court.

She claimed that President Adama Barrow’s meeting with Dr Gabou Mendy at State House disclosed that $87,000,000.00 was received by the President from a foreign investor to build a 5 Star Hotel for the OIC three-day Conference after which the property would diminish to the said investor.

“Whoever they give it to let the person go and find out what to do. As I am talking to you, the land belongs to the organization (Global HOMM) and nobody has any right or anything to do on this land. Anything that is done here should be under our approval otherwise it is illegal, and you would be charged with contempt of court order.”

She outlined that the OIC Secretary in a press conference on Monday 20th June 2022, the same day the high court dismissed the State application, responded to journalists that the land is fully owned by the state and has been given to a private investor whom they approved a purposed settlement agreement on Monday, April 12th 2021.

She added that the court has ruled in favour of Home of Medical Mission that they are the sole owners of the land and that they have won two court cases on the said ownership in which the state filed a case to terminate the judgement, that the court ruled out and reinforced the previous ruling that it belongs to them.