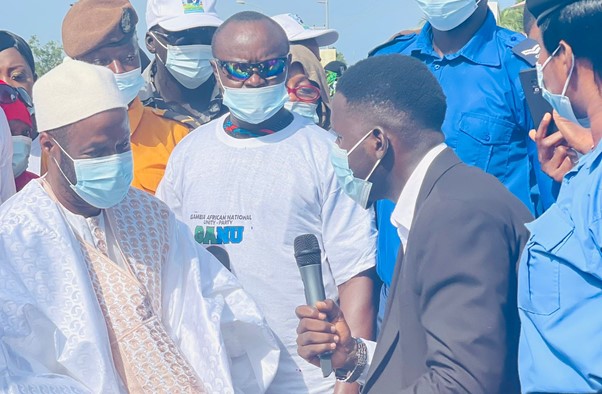 The leader of the Gambia Alliance for National Unity (GANU) Sheikh Tijan Hydara has today Wednesday 3rd November 2021 officially submitted his nomination papers as he seeks to run for president of The Gambia in the country’s 2021 election.

According to Mr Hydara, his destiny is in the hands of God and not Former President Yahya Jammeh. He was speaking exclusively to The Fatu Network at Election House.

His comment was in response to a question about the seeming coalition between himself and the APRC of former President Jammeh.

Commenting about Former President Jammeh supporting him and later withdrawing his support he said, “All he [Yahya Jammeh] has said, or the comments he has made are rubbish.”

He further noted that he has his own Political Party and that is GANU, insisting that there was no marriage between himself and any other party.

“We didn’t sign any agreement with the APRC or any other party,” he said.

He revealed that the APRC of Jammeh wanted him to be part of the coalition, but he decided to opt-out.

“I don’t want to be a dictator, whatever decision I have to make I will have to consult my people and we all have to agree,” he said. Adding that his party’s structures are intact, and they (GANU) are ready for the elections.

When elected president he promises to start by uniting the Gambian people since he thinks the people are deeply divided.

“We are deeply divided, you have allowed us, politicians, to play with your mind, the GANU party will make sure that does not happen. The Gambia should do away with all the tribal issues we should see ourselves as Gambians and this is what I will attain when I become president,” Hydara said.

When asked about why he brought dollars rather than Gambian Dalasis to pay the required deposit as per the requirements of the Electoral Commission, he said that was a mistake, but he corrected that almost immediately.

Sheikh Tijan Hydara a native of Brufut, was educated at the Gambia High School from 1981 to 1987 where he completed GCE A levels. He proceeded to read Law at the University of Sokoto, Nigeria graduating with an LLB combining Islamic and Common law. He later obtained his LLM at the University of West Indies, Barbados in 2002.

In 2003, he was appointed Attorney General and Minister of Justice where he served until 2006 when he went on to lecture law at the University of The Gambia