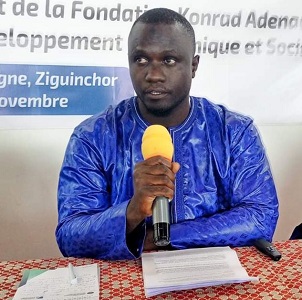 Momodou Bah, a one-time independent presidential aspirant in the 2021 presidential election has told The Fatu Network in an exclusive interview that the Gambia and Senegal need to collaborate to curb cross-border criminalities.

Mr Bah, who is the leader of the African Federalism and Republican Orientation (AFRO), a movement he intended to register last year as a political party, said the Gambia is surrounded by Senegal and that the two countries are the same.

“I don’t believe one country should dominate the other. Gambia and Senegal should collaborate to address cross-border criminalities.

It should be a win-win collaboration where each people will see the others as their helpers,” Bah told TFN.

He further stated that there is a need for digitization at the border to monitor criminal activities.

The AFRO movement leader added that President Barrow and President Sall should work together to address issues affecting the two countries.

Mr Bah added that the Casamance region has two major economic activities: timber and drugs. “So, these have become a huge concern in the region,” he noted.

According to him, Senegal has all the right to protect their forest, adding that the timber coming into the country is from Casamance and the drugs.

However, he recalled that since the conflict occurred in Casamance around January and March, some people who fled for their lives are yet to return.

“There should be a dialogue between the governments, NGOs, and Civil Society Organizations to ensure the return of those families.

“If their way of earning income is not no longer available, there should be other means they should be engaged to earn a living,” he asserted.

Mr Bah further urged the two governments to look into the issue and provide youth jobs so they will not be engaged in such activities.

“The drugs that are coming into our country are not helping our youths at all.

“We have poor-roads borders and there is a need for re-enforcement of the major borders.

“We are surrounded by Senegal and that is good for us because before any terrorist group could enter the country they must be detected by Senegal. We are the same and we need to support each other,” he ended.

Share
Facebook
Twitter
WhatsApp
Linkedin
Viber
Previous article“We have plans to produce all the oxygen we need,” Gambia to address oxygen shortage
Next article“This Country Could Be Unstoppable,” UN Assistant SG Confident of Gambia’s Development if…