Moe Ebrahim Secka: From a labourer in Qatar to participating in world’s biggest fitness competition in the U.S. 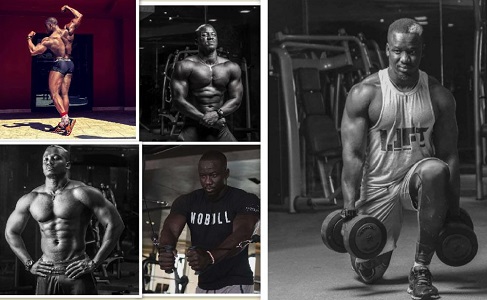 Progressing from being a labourer in Qatar in tough times to becoming a professional fitness coach and a nutritionist, Moe Ebrahim has defied the odds in a foreign land. Moe Ebrahim’s hard work backed by his incessant will to reach the top, coupled with a desire characterised by patriotism to raise the Gambian flag higher, has set him up for the biggest competition of his career as he travels to Las Vegas, USA, next month to compete in a bodybuilding competition.

A fitness manager and coach for Katara Club in Qatar, Moe first journeyed to the golf coast from The Gambia in 2013. Physically strong and addicted to the gym, Moe began doing hard jobs to make a living while consistently visiting gym centres to do what he likes doing and gradually moulding a niche for himself.

“When I move to Qatar in 2013, it was very tough at first. I went through very difficult times here. I did some hard jobs just to stay by. For a while, I worked as a labourer. However, though at that time, somehow, I managed to be consistent as much as possible with my workouts. It kept me sane,” narrated the physically built athlete as he recounted the beginning of his incredible take-off career in Qatar.

Consistent and willing to make life better for himself, Moe Ebrahim, in 2015, had a job as a sales assistant at a store called Go Sports. Being so passionate about the gym, he convinced his employers to move him to the gym equipment department, a move that would transform his journey.

“There, I started to learn about the details of machines and met several fitness coaches who came to buy stuff. I was inspired to be one of them. That was the time I enrolled in courses to become certified as a coach. I studied and had numerous certificates in exercise and nutrition,” he explained.

“I started training people on the side in 2016 as a part-time job. In 2017, I resigned from Go Sports to pursue my dream fully,” he told TFN.

Moe would then move to train guests in hotels and then established an online coaching business.

Currently, Moe Ebrahim is the head of the fitness department in the Karata Club, a club owned by the Qatar government whose members are top officials in the government.

Persistent and consistent in pursuing his dreams with an indomitable desire to raise the flag of the Gambia higher, Moe Ebrahim is now moving to a bigger stage in his career. On December 4 in Las Vegas in the United States, he will be competing in the Amateur Olympia bodybuilding competition. It is a competition where athletes do posting routines to show their physiques on stage in front of judges.

The federation that organizes this competition in Las Vegas is the International Federation for Fitness Bodybuilding (IFBB). It is the biggest fitness federation in the world. A win for the Gambian will propel him to being a top-level fitness athlete in the world.