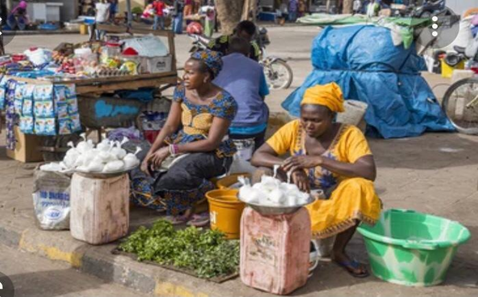 Vendors at Serrekunda Market who sell mint leaves locally known as “nana” have expressed to this medium the challenges they encounter daily in earning a living.

They told The Fatu Network that the lack of enough space at the market is the reason they take the risk to sell their goods by sitting along the busy main road where vehicles ply.

Mariama Njie, a vendor, said selling “nana” is the only business they do for a living.

“It’s what we depend on to feed our families. We don’t have a particular selling location as where we currently sit is part of the road,” she said.

She added that the spot is not safe for them, but they however sell their goods there because they have no options. “We want to have a safe place where we “nana” vendors can sit and sell.”

Isatou Jeiteh, another vendor, disclosed that she wakes up as early as 6am to go to the market to sell, but she hardly gets a place to sit and sell.

“I pay my children’s school fees from this small business. If I don’t sell, who will pay their school fees?” she asked.

She urged the Kanifing Municipal Council (KMC) to provide them a place, saying that the roadside they are using to sell is risky.

Fatou Touray said the lack of space in the market warrants her to sell along the roadside.

“It’s not my choice to sit along the roadside to sell. It is just that I don’t have a space. Sometimes, we even have push and pull with drivers because that is where they (drivers) do ply.

We are calling on authorities to provide us a space to sell our goods,” she concluded

Mint leaf is a popular ingredient in several foods and beverages, ranging from tea and alcoholic drinks to sauces, salad and dessert. In most African countries, people put it in green tea (ataya). It is said to have health benefits.