Members Of The Lands Commission Sworn In 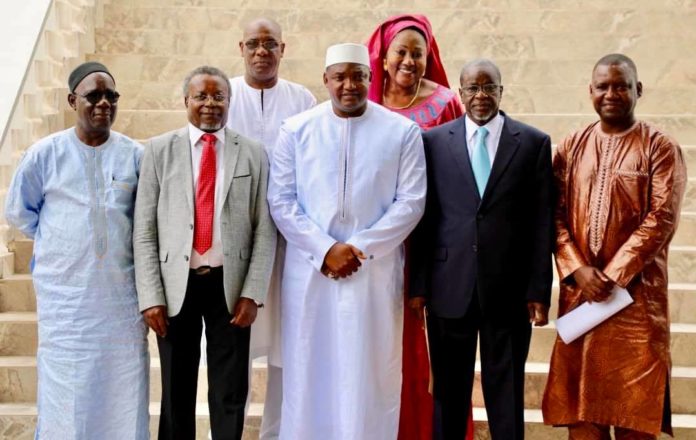 President Adama Barrow Monday, September 17, presided over the swearing in ceremony of five members of the Lands Commission at State House in Banjul.

Justice Raymond Sock was sworn in as Chairman of the Commission with four other members, Momodou S. Jobe, Nancy Nyang, Kemo Conteh and Buba Barry.

Land grabbing and disputes is one of the greatest challenges of the former regime of Yahya Jammeh who was personally involved in most cases. It could be recalled that when President Jammeh came to power, he took over the properties of former Ministers and senior officials of the ousted PPP regime. Some of the land disputes were politically motivated by the former regime.

Not long ago, the Commission of Inquiry probing into the financial dealings of the former president seized almost 180 landed properties allegedly belonging to Jammeh.

President Barrow after the swearing in ceremony told commission members that the tasks given to them is a challenging national assignment.

“You have been trusted to guide the government in the matters of land dispute,” President Barrow said.

Barrow highlighted the challenges of land disputes which he said were politically motivated by the former regime. He added that the challenges are a hurting experience to the country.

“The Commission is not a court of Appeal and it will not sit on matters that are before the court,” he added.

Shortly after taking the prescribed oaths, Justice Raymond Sock spoke about the mandate of the Commission which includes advising the Lands Minister on policies, land allocations and investigations amongst others.

“The Commission will advise the Minister on policy, land allocations, investigations and perform other functions assigned by the Minister,” Chairman Sock said.

Lands Minister, Musa Drammeh called on the Commission to expedite the findings and submit its report in the shortest possible time.