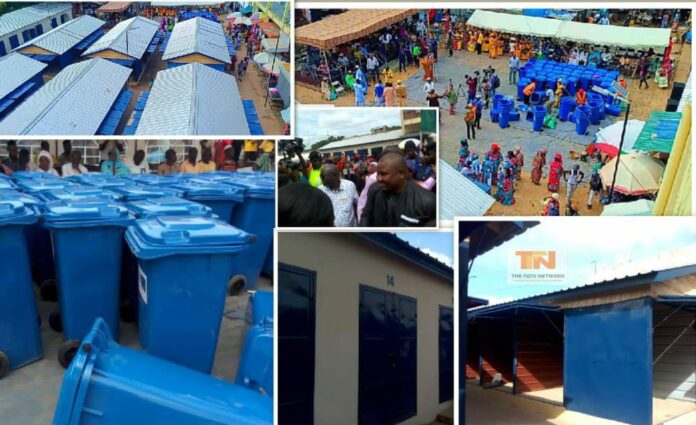 The Lord Mayor of the Kanifng Municipal Council (KMC) Talib Ahmed Bensouda has disclosed his monumental infrastructural agenda to construct 7 new markets within his municipality to decongest markets.

The initiative according to mayor Bensouda is already captured in Kanifing Municipal Council’s market development project which intends to provide shops and canteens for more vendors and businesses to ease the high demand for market space as the population increases.

The Lord Mayor of the Kanifing Municipality made the statement on Tuesday while presiding over the official inauguration of newly built structures at the Latrikunda market.

“This project is part of the Latrikunda Sabiji market expansion project and part of the KMC market development project. The Kanifing Municipal Council intends to provide enough market space for all the vendors and traders within the municipality in the coming years, we intend to construct 7 new markets in Faji Kunda, Abuko, Bundung Jola Kunda, Tippa garage in Bakoteh, Mbari Padembo in Serrekunda, Fajara and Bakau,” Mayor Bensouda disclosed.

He further highlighted that the project being inaugurated is a supplement to the already built-storey building constructed earlier at the market premises.

“KMC is here to serve the people and ensure that quality of life has improved.”

The new structures inaugurated at the Latrikunda Sabiji market include 26 canteens,79 kiosks and 2 toilets. Hundred and fifteen (115) dustbins were also presented to keep cabbages which normally scattered around the market vicinity.

In another development, Mayor Bensouda unveiled plans to allocate more dustbins for waste collections within the municipality and market premises as well.

“Our plan is to provide every compound and market vendor with a dustbin within KM,” he stated.

The chairman of the KMC sub-committee of markets, councillor Lamin Jammeh spoke at length on the commitment of his committee to improve market conditions.

“We initially thought of allowing the vendors and businesses themselves to construct their own canteens, but we later decided that the traditional structural setting of the market needs to change,” Mr Jammeh said.

He justified that the new canteens are modern structures and are more secure in case of emergencies and the risks of fire outbreaks are minimal.

“The expansion project will be adjusted to fill the space in the market environment. The vendors made an earlier plea for a reduction of canteen rental fees, but it was late, now the issue is addressed in the 2023 budget. Effective January, all canteens and shop rental fees will be reduced,” Council Jammeh assured.

Delivering a statement on behave of the market vendors, the president of the Latrikunda Sabigi market committee Mr Abdoulie Camara welcome the building of the new canteens but appealed for more considering the high demand. He commended the Kanifing Municipal Council for fulfilling their promise.

The Kanifing Municipality is densely populated largely due to rural-urban migration thus making demands for market shops and canteens high.