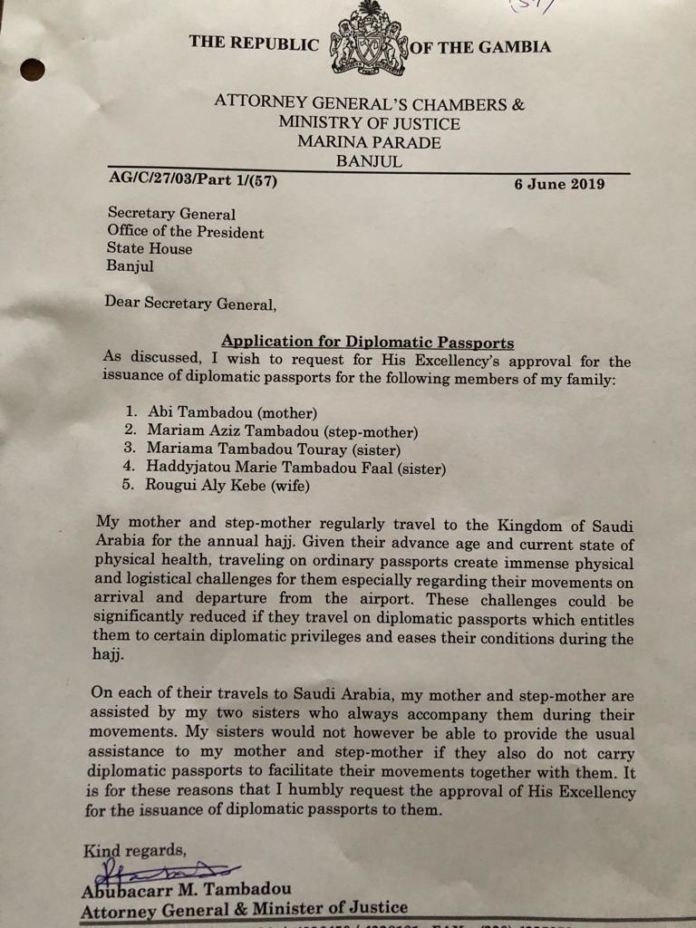 Abubacarr Tambadou told State House his mother was a regular traveller who could not travel on a normal passport because of her age.

The justice minister on Saturday became the first top government official to get caught up in a diplomatic passport hooha that has swept the Barrow administration in recent weeks.

A letter emerged online showing the office of the president approving a request for diplomatic passport to be issued to the justice minister’s wife, mother, step-mother and sisters.

But another letter has emerged online showing Mr Tambadou requesting that his mother, step-mother, wife and two sisters be issued diplomatic passport.

The justice minister said in his letter to the secretary general: “My mother and step mother regularly travel to the Kingdom of Saudi Arabia for the annual hajj.

“Given their advance age and current state of physical health, travelling on ordinary passports create immense physical and logistical challenges for them especially regarding their movements on arrival and departure from the airport.

“These challenges could be significantly reduced if they travel on diplomatic passports which entitles them to certain diplomatic privileges and eases their conditions during hajj.”

The justice minister went further to say in the letter which was written on 6 June 2019 that, “on each of their travels to Saudi Arabia, my mother and step-mother assisted by my two sisters who always accompany them during their movements.”

“My sisters would not be able to provide the usual assistance to my mother and step-mother if they also do not carry diplomatic passports to facilitate their movements together with them,” the justice minister added.

One week later on 13 June, Lamin E Kanyi of the office of the president wrote to the permanent secretary at the ministry of foreign affairs and the justice minister himself informing them about the approval of the request.

But Gambian Facebook users have reacted angrily as soon as the letter came out with most asking in what capacity these individuals were issued such passport.

Gaye Biran said:  “I’m baffle by the above-mentioned names associated with the minister of justice family. I would like the minister to explain in what capacity was these people issue with such a passport and what interest are they contributing to the Government of the day.”

Caira Grey-Johnson on her part asked: “Diplomatic passports for them on what merit????”

Muhammed Bah said: “For me to believe our National Assembly is really functional: they will call Hon. Ba Tembadou for questioning on Monday.”

Mr Tambadou declined to comment on the issue when contacted by The Fatu Network on Saturday.

A former minister in the Jammeh government told The Fatu Network on Saturday it was ‘impossible’ under Jammeh for a minister to ‘use his position to have his wife hold a diplomatic passport.’

A former secretary general and head of the civil service also told The Fatu Network no ‘minister dared to write’ to former President Jammeh asking for his approval to have their wives hold diplomatic passport.

Share
Facebook
Twitter
WhatsApp
Linkedin
Viber
Previous articleFury as leaked letter shows Tambadou’s wife, mother, step-mother and sisters all holding diplomatic passport
Next articleSamuel Eto : All you need to know about one of Africa’s great as he announces retirement