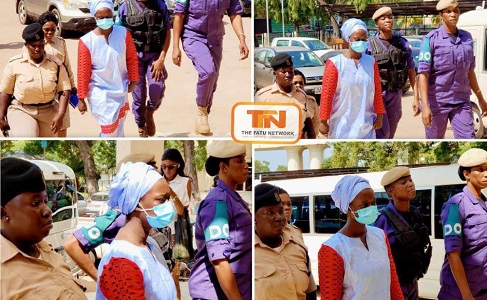 Pa Momodou Jeng, who said he is a friend of the accused Kumba Sinyan, has on Monday 5th December 2022 testified in court that the accused had informed him of killing her boyfriend, Lamarana Jallow, on the very night of the incident at around 11 p.m onwards.

“After few minutes, I called her. This was when she told me she killed her boyfriend. I didn’t believe what she said. I didn’t take it seriously,” said the second prosecution witness in the murder trial.

The witness testified that he received the first call from the accused at around 11 p.m. onwards when he was at Kotu with two of his friends, asking him to pick her up from the stadium or send someone to do so.

He narrated that his question to the accused about what she was doing at the stadium at that time of the night was not answered. Instead, the accused just told him that he needed to go pick her up and that he should go through the back gate.

“I told her that I need to know before I would come over. I insist for her to tell me the reason I should pick her up. She eventually hung up,” the witness narrated.

The witness told the court that after telling him that she killed her boyfriend, the accused later told him she needed favour because someone saw her when she was leaving the scene.

“I asked her what kind of favour did she need. She then informed me that the police would come in search of her, and I should tell them [the police] she was with me. I told her I would not do that,” the witness said.

He continued that he only got to know what the accused told him was true the following morning when a friend of his texted him about the incident.

The witness was asked during the cross-examination by defence counsel, S Twum whether he was feeling emotional. He replied in the negative, saying he was just not feeling well.

He was also asked about how long he has been friends with the accused. He replied that they have been friends for a little while, but their friendship has not been that consistent.

He further said they grew up in the same neighbourhood, Fajara South, Bakau.

The case has been adjourned to 6th December 2022 for the continuation of the cross-examination of the second witness.

Kumba is charged with the murder of one Lamarana Jallow at Friendship Hotel in Bakau on the 14th of September 2022.