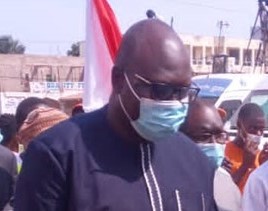 Abdoulie Ebrima Jammeh is a former teacher at Gambia High School. He is the National Unity Party (NUP)’s Secretary-General and Standard-bearer for the 4 December 2021 presidential election. Jammeh was the Director-General of The Gambia Civil Aviation Authority (GCAA) for over 9 years.

From 2012 to early 2021, he was Director-General of The Gambia Civil Aviation Authority (GCAA). Also served as Head of the Banjul Accord Group Secretariat, an ICAO Sub-Regional Grouping of ECOWAS CAA’s for the same period.

Jammeh was Deputy Director-General of The Gambia Civil Aviation Authority (GCAA) from 2003 to 2012. He also doubled as Project Manager for Banjul International Airport Improvement Project from 2009 to 2012