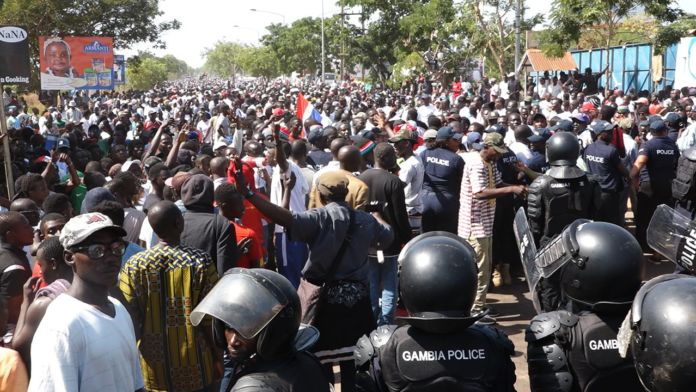 I want to congratulate the 3yrs Jotna movement for organizing a protest that was well coordinated and peaceful. The government and the security acted professionally and lawfully to ensure Citizens can express their grievances to the executive without any intimidation, fear of arrest or disappearance.

This is the first time in my life in witnessing such a magnitude of protest which ended in high note of peace and, orderly manner.  Giving I was a living witnessed during the April 10 and 11th demonstration in Brikama-ba during which I saw my fellow students been gunned down, tortured while others were subjected to inhuman treatments at the hands of their own government, that unfortunate incident still lingers on and, yet still as it lives on I am still compounded with fear of any known protest, giving what I for what I saw was quit traumatizing to say the least.

That the primary role of any government is to actively respond to the needs and aspirations of its citizens and to ensure their rights are protected, preserve and that they live in peace, dignity, and harmony.

What I saw on the 16 December, 2019 is a win for the Gambia that needed to be celebrated by all. As Hon. Omar Jallow (OJ) one said; ” if the government is afraid of its people there is  democracy, but if the people are afraid of the government then there is dictatorship”, what I saw is a clear testimony of government fearing his people which is a great achievement of our developing democracy after 22yrs of oppression.

The 3yrs Jotna movement demands in their petition seriously need to be addressed urgently as their demands need to be tested by the highest court of our land.  I agreed with them that they have the rights to protest and must be giving the required protection to do so, but I strongly disagree that they have the powers to forcefully remove the sitting president from office just because he made a promised which he now didn’t want to fulfill. The constitution is there to prevent and encourages certain traits in the way and manner one should behave.

As citizens when we follow rule of law it will be a valuable traits in our country that we can passed down from generation to generation, and it will improve the efficiency and production of our country, failure to do so will significantly causes the collapse of our Country, and then disunity will persist.

As Gambians, we are all obliged to protect and defend the constitution and must not allow individuals or political ambitions to cloud our collective responsibility to defend the constitution by allowing some Gambians to act illegally. 3yrs Jotna’s movement has the right to petition the president as a way to remind him about his promises, and anything beyond that will be consider unlawful and, civil societies should not be seen as anti-government by supporting anything whether legal or illegal, that will be an abdication of responsibility or insincerity of civil society organizations in the Gambia. What is correct is every Gambian including the president rights must be protected and defended as far as their actions are within the remits of the law.

In contrast, the Barrow for 5yrs is also in preparation to protest that President Barrow must complete his 5yrs term. These two groups could easily create a significant conflict in the Gambia hence both sides wouldn’t relent. Therefore, if the 3yrs Jotna movement is confident that they have legal grounds then they should sue the president likewise the 5yrs movement should petition the 3yrs Jotna movement and have the court redress these issues.

What is looming in the Gambia can be very catastrophic for the small Gambia hence its citizens on both sides are ready and willing to fight for something that is not within the confines of the law. Think about it for a minute if the 3yrs Jotna and 5yrs movement all went out on the 20th January 2020, how would our country look like? Is it something that can finally lead us to civil war as so many things are grooming in that small Gambia from tribes, religion, politics, etc. All this will come in to play and would take us so many years to bring back sanity in our country.

If both sides 3yrs Jotna and 5yrs movement failed to take the issue to court, individuals, organizations that are there for the best interest of Gambia should take the matter to the court. I expect the bar association who is the custodian of the law to defend the constitutional provision by suing the side that is acting illegally before things go out of hand. Yet still President Barrow himself should sue the movement that is hell-bent to violate his rights.

Finally, if actions are not taking now to resolve this matter we will live in the Gambia that will be lawless and President Barrow will not be the only one affected, but a lot of Gambians hence it will come to time even President barrow resign there will be instability and the people will continue to fight each other.