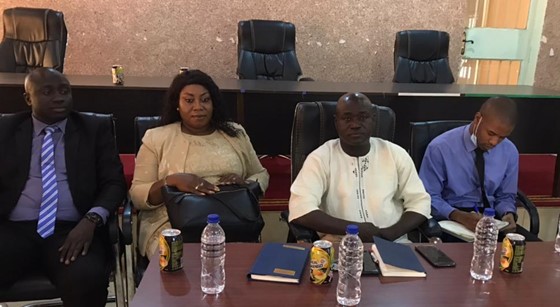 The new payment system is meant to help properties and owners of establishments to pay their tax annually via the banks, a more comfortable method when compared to the old method when the tax had to be paid manually at the council.

The Chief Executive Officer (CEO) of Kanifing Municipal Council Kajally Janneh explained the motive behind the new initiative. He noted that with the new initiative the council will receive tax payments electronically through the banks.

“Before the council encouraged and advocated for license and rates to be paid at the main office. Now with the good initiative of the directory of finance and its staff who came up with the idea the payment system has been made easier for taxpayers.

We have been encountering lots of challenges and complaints about the old method of tax payments. As service deliverers, we prioritise the concerns of the taxpayers within the council.

As a result of this we deemed it necessary to come up with the idea of introducing a new method of tax payment,” he explained.

The CEO further stated that the council has made efforts to reach out to various banks within the council but only three responded to their call.

Sheriff Njie is Deputy Finance Director of KMC, he highlighted the challenges faced by the council in the area of tax collection.

He noted that the council is collecting rates from one location to another because it can only be paid at the main office. With the new initiative, he expressed hope that it will ease the burden on both the council and taxpayers.

“The method of payments has been in existence for long and now technology has warranted us to decentralise the payment to various banks,” Njie said.

“What the taxpayers need is for them to collect invoices which is distributed as early as January each year to ensure that every taxpayer gets their demand note and they will walk to the Bank. The Bank will log in to our platform which can give them access to our database directly. The bank will then generate a receipt that will bear the council logo,” he explained.

Sally Sarr Ceesay Head of Business Department of MEGA Bank and Malick Mboob representative from Guarantee Trust Bank expressed delight in the partnership with the Council. They said they are pleased to assist in national development. They assured the council that they will deliver quality and convenient services to the taxpayers.

“We will give the taxpayers quality and convenient services at Mega Bank and I will assure you that this partnership is a step in the right direction,” Sally Sarr Ceesay said.

The new bank payment system will help the taxpayers to pay their annual tax through the banks without walking to the council’s main office.

Share
Facebook
Twitter
WhatsApp
Linkedin
Viber
Previous articleMeet Archie Williams: A Man Who Spent 37 Years In Jail For A Crime He Didn’t Commit
Next article2022 Fifa Ranking: Gambia Moves From 150 To 125 In The World