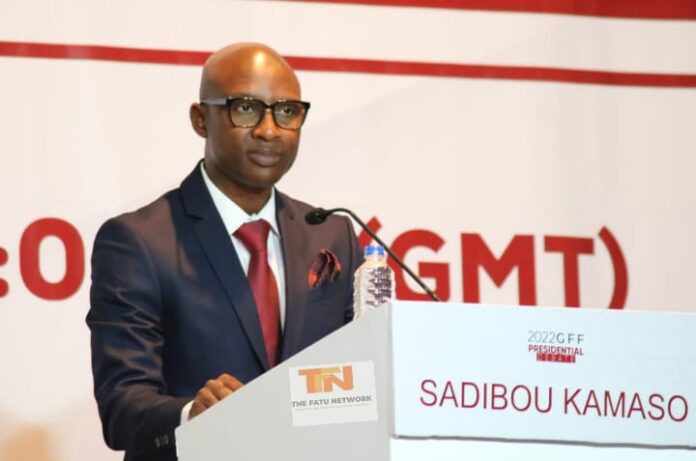 In what was supposed to be a fierce debate between the two Gambia Football Federation (GFF) Presidential candidates — and as anticipated of his opponent putting up a no-show — Sadibou Kamaso, last night, stood on the podium alone at the Kairaba Beach Hotel, and in his bid to convince the seated football stakeholders of why he is the right candidate for the GFF Presidential office, pledged to fix the perennial problems that have befallen Gambian football in recent years.

“I am the future. I know what your problems are, and I know how to fix these problems.  When we go into the office, it will be a thing of the past for us to be crying about sub-standard pitches, lack of funding or players not having the necessary support,” the 42-year-old promised.

Answering a wide range of questions posed by the moderator of the event, Sadibou Kamaso repeatedly emphasised that, in a Kamaso-led executive, monies meant for football will be spent on football.

He further stated that infrastructural development in the Gambia under his reign as the President of the GFF will be of international standards, adding that he will invite ex-national team players aboard; promising to create funds for them.

“We are bringing the women to the decision-making table. We are going to increase the participation of women and we are going to advocate for women’s football clubs to have the same franchise when it comes to the general assembly because for far too long their votes have been confided to only three votes.”

According to Kamaso, it is the first time in the history of GFF elections that a women vice president is being presented.

The Commission on Political Debates (CPD) came into the nation’s football political frame for the first time to organise a debate between the two people vying for the utmost post at the football house.

However, incumbent Lamin Kaba Bajo declined to participate in the debate, thus turning it into a town hall meeting for Sadibou Kamaso as he mounted the podium alone to eloquently communicate what his team has for football stakeholders.

The GFF election is scheduled for the 27th of this August, 2022.