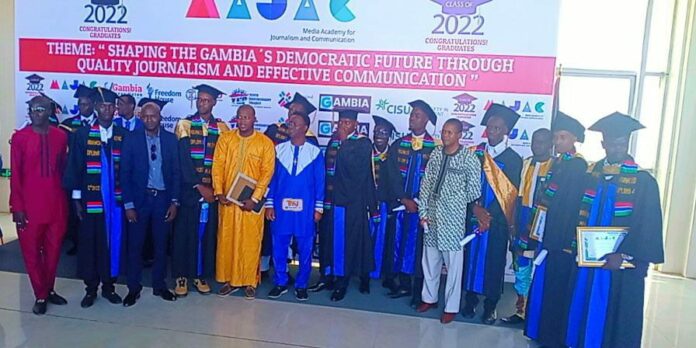 The Media Academy for Journalism and Communication (MAJaC) has graduated about 40 students who completed their academic requirements from the advanced diploma level in its maiden graduation ceremony held at the OIC conference centre, Bijilo.

MAJaC was established in 2010 by The Gambia Press Union to strengthen democracy through broad-based and high-quality professional training for media and communication specialists.

Since its establishment, the school has been producing outstanding students in the areas of journalism and communication.

Professor Pierre Gomez, the Minister of Higher Education Research Science and Technology told the graduates that journalism is a noble profession and that the work of journalists helps transform the country.

Prof. Gomez added that the solution to the new generation for rapid development in TVET.

He reiterates his ministry’s commitment to making the Gambia heard in the subregion.

“Journalism is a noble profession that helps you inform people. Today you are all going home with the knowledge that you can use to help in the development of the country. The skills you acquired are very important.

You have the knowledge and skills that are needed in the journalism field. My ministry will continue to support TVET in the country. You should continue to work hard to achieve your desired goals,” Prof Gomez told the graduates.

Sang Mendy, the Managing Director of MAJAC, congratulated the graduates for completing their academic training. He tasked them to strive harder to make their dreams a reality.

“We are here to celebrate these young men and women who have completed their professional training and are ready to join the field of journalism and communication,” he said.

Mr Mendy stated that the school has continued to produce journalists who are working to strengthen democracy.

“From 2015 to date, the school has produced students who are occupying key positions in the media and communication specialists. Some are editors, senior reporters, and media owners,” he added.

“MAJaC has given you much that you cannot fail. We will continue to monitor your professionalism. You must endeavour to achieve greater success. You must keep our flag higher.”

Mr Mendy urged the government through the Ministry of Higher Education Research Science and Technology to support TVET education in the country.

Modou Joof, the Secretary General of The Gambia Press Union, explained why MAJaC was established a decade ago.

“The Gambia Press Union began a pilot project to train professional journalists and it graduated about 12 students two years later. The purpose was to help strengthen democracy.

“Since 2018, four sets of badges have completed their advanced diploma courses. These are award-winning journalists in the areas of investigative, human rights, political, women and children, sport…,” Joof said.

Muhammed S Bah, the President of the Gambia Press Union said the graduation marks a journey of hard work, dedication, and sacrifices by students and staff of the Academy.

“MAJaC is the only journalism school that produced [Gambia’s] first-ever female editor-in-chief. The Gambian media is MAJaC. There is no media house in this country that does not have MAJaC students. Remember to always comport yourself to the highest professionalism.

It is up to our generation of media practitioners to change the narrative that journalists are poor people,” he said.

Mr Bah further stated that journalists can change the narrative by maintaining the highest standards of professionalism and consistently telling stories that matter to people.

Various speakers commended the graduates for completing their course and implore them to push hard and report stories that are of public interest. Several graduates were awarded certificates to recognize their outstanding work during their studies.