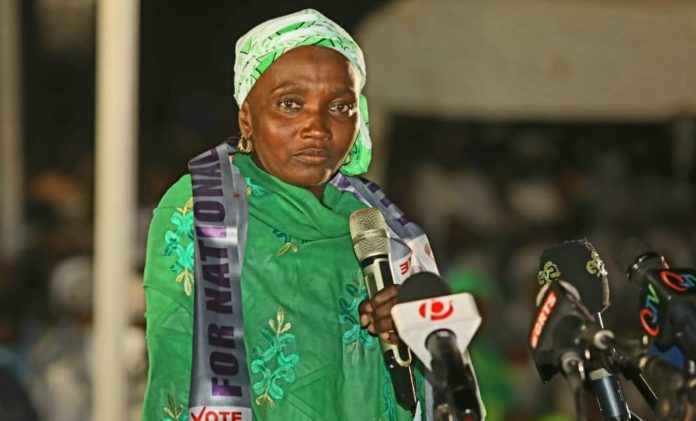 Isatou Jifanga Jarju has reacted to the crisis that has erupted within APRC following former President Yahya Jammeh’s action this past Friday.

Jammeh made a call to his supporters on Friday where he said he was using his power as supreme leader to sack Fabakary Tombong Jatta has his team for entering into an alliance with NPP without his approval. Jammeh then named 11 new leaders for APRC and asked that they work with Sheikh Tijan Hydara’s GANU party.

Speaking on Saturday in Sukuta during President Adama Barrow’s big rally there, Isatou Jifanga Jarju who is the APRC national women mobiliser said: “What the APRC constitution says is the party leader and secretary general owns the party and is the head of the party. Who is that person? That is Fabakary Tombong Jato Jatta.

“So anyone dancing and laughing… But it’s said he who laughs last laughs the best. Your Execllency, do not pay attention to those that are laughing. On the 5th of December when you are laughing, they will enter a hole.

“We are not stupid, he suspected this a long time ago. Fabakary and his executive are intelligent, so we are not surprised by anything. We are Fabakary’s disciplines and we are behind him all the time.”