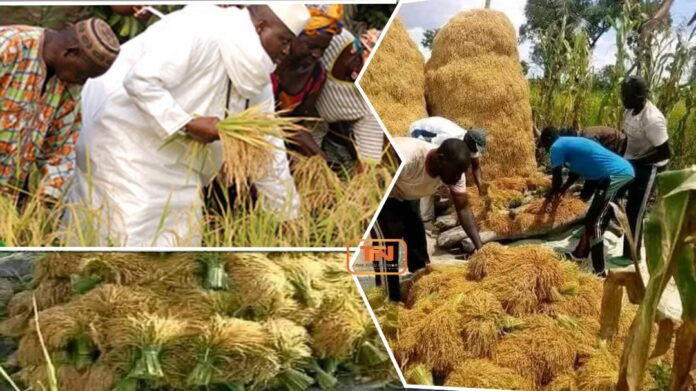 By: Modou Touray
A group of farmers, who are staunch loyalists of former President Yahya Jammeh, have realised a bumper harvest in rice cultivation. The jubilant farmers have vowed to maintain the ex-president’s farming legacy.

The loyalists, who formed an agricultural-based association dubbed Champion Farmers, said their abundant rice yield will enable them to reduce the amount of money they spend on imported rice for feeding.

“Farming is an important legacy of ex-president Yahya Jammeh. During his regime, he made a national call for citizens especially the idle and employed youths to venture into farming hence affordability of imported rice is challenging to low-income earners.

“We were motivated by his exemplary move to lead farming himself. We decided to come together to engage in large-scale rice production. This is a legacy we vow to maintain forever,” said Alhagie Karamo Jammeh, leader of Champion Farmers.

The earliest harvested rice was cultivated in settlements within Niamina in the Central River Region (CRR). According to these motivated farmers, they are still determined to continue the cultivation of rice to feed themselves despite zero support from the current government, projects and non-governmental organizations.

“We depend on manual labour to cultivate rice and other processes needed before the harvesting period. The youth farmers have the zeal to change the mindset of people who see rice cultivation as a female activity,” Alhagie Karamo Jammeh explained.

He further called for help since most of the agricultural tools donated to them by ex-president Jammeh to enhance their rice production are damaged and beyond repair and urgently need replacements.

“In a tour of rice harvesting this year, we started in Niamima where we have over 200 youths participating in rice cultivation. Although some of them gave up and worked elsewhere because of frustration over hard labour due to lack of support.

“We have difficulties because we have no support with farming tools from the government. They perceive us as the enemies of the current government because we are still loyal to the ex-president who encouraged and support our farming ventures,” Alhagie Karamo Jammeh said.

He acknowledged that it is always their will to promote Jammeh’s back-to-the-land agenda, which encourages the cultivation of food crops with the motivational theme: Grow what you eat, eat what you grow.

“The government is not open to us. because they would not let us have an audience with them and show them the way forward and the importance of cherishing this initiative. Anytime we are embarking on a tour of our farms countrywide, we rent a vehicle and if that car is broken, we have to pay it back,” Mr Jammeh’s narrative

Mr Jammeh also highlighted the burden of transportation from farms to the Kombos to sell their produce of vegetables and food crops and called on the government for assistance.