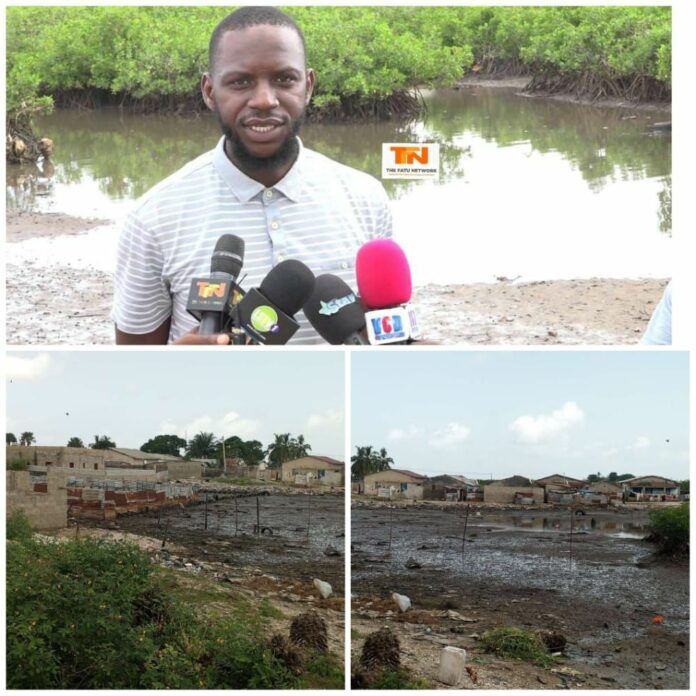 Residents of New Jeshwang-Ebotown in the Kanifing Municipality are calling on the government to intervene in addressing the issue of people settling illegally on their wetland which they said is a growing concern.

They attributed the current environmental crisis facing the community to the settlement on the wetland. The youths said they will address the issue on their own if the government and relevant authorities do not address it.

Habib ML Ceesay, the Councilor of Old Jeshwang Ebotown Ward, said the issue of people settling illegally on the wetland is a growing concern that needs urgent government intervention.

“All those building on the wetland don’t have documentation from the Alkalos and if the government do not address the problem, we the youths will address it by ourselves. We would rather not reach that stage. The stakeholders should come and address the situation before it gets out of control,” he said.

He added that the settlement is affecting their wetlands, thereby causing other environmental hazards in the community.

“I am calling on the government, and other relevant authorities such as the Physical Planning, our National Assembly representative, the Local Government and Lands Ministry to address the issue. If not, we will go and demolish all those structures and that will lead to chaos, which we don’t want.”

Mr. Ceesay challenged all those buildings on the wetland to produce authentic documentations they acquired from the Alkalos.

He claimed that the youths are furious currently because the environment is everyone’s concern.

According to him, they have reported the matter to the Local Government and Lands Ministry on several occasions when Honorable Musa Drammeh was the minister, but to no avail.

He added that the community is concerned about the illegal settlement on the wetland.

“We have engaged the two Alkalos on the wetland issue and they both told us that they have not sold any land to anyone, and we trust them. They (alkalos) informed us that anyone who claimed to acquire the lands from them should present their documentation,” Habib ML Ceesay told reporters yesterday.

He accused non-Gambians of involving in selling the wetland within the area. “We are assuring the community that there will be no new buildings within the wetland from now on. I am elected by the people to represent them, and their concerns are my priority. Before I take any step, I will have to consult my people because I am answerable to them.”