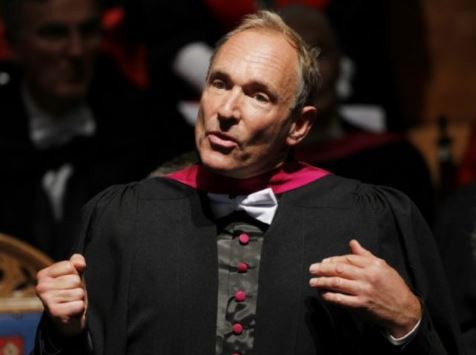 Thirty years ago this month, a young British software engineer working at a lab near Geneva invented the world wide web, later known as internet, for scientists to share information that would ultimately change humanity.

But three decades after his invention, Tim Berners-Lee has warned that his creation has been “hijacked by crooks” that may spell its destruction.

Berner-Lee’s old office at Europe’s physics lab CERN now looks no different than the others lining the long, nondescript corridor within the expansive compound.

The only indication that history was made there is a small commemorative plaque and a page from an old CERN directory hung on the door, with “MOMENTARILY OUT OF OFFICE!” written in jest next to Berners-Lee’s name.

“Tim worked a lot,” said technician Francois Fluckiger, who took charge of the web team after Berners-Lee left for the Massachusetts Institute of Technology (MIT) in 1994.

“The lights were always on in his office,” Fluckiger told AFP.

Berners-Lee was responsible for CERN’s internal directory but was interested in ways to allow the thousands of scientists around the world who cooperated with the lab to more easily share their work.

His vision for “a decentralised information management system” soon gave birth to the web. Primitive forms of the internet — a network linking computers — had previously existed, but it was the World Wide Web that allowed web pages to be collected and accessed with a browser.

“Very early on, we had the feeling that history was in the making,” Fluckiger said.

In 1990, Belgian scientist Robert Cailliau came onboard to help promote the invention, which used Hypertext Markup Language, or HTML, as a standard to create webpages.
They created the Hypertext Transfer Protocol, or HTTP, which allows users to access resources by clicking on hyperlinks, and also Uniform Resource Locators, or URLs, as a website address system.

At the end of 1990, Berners-Lee set CERN’s first web navigator server into action.

The browser was released outside of CERN in early 1991, first to other research institutions and later to the public.

Fluckiger, now retired, hailed the web as one of three major inventions in the 20th century that enabled the digital society, alongside the Internet Protocol (IP) and Google’s search algorithms.

But he lamented the “online bullying, fake news, and mass hysteria” that flourish online as well as threats to privacy.

“One has to ask oneself if we did not, in the end, create a completely out-of-control monster.”