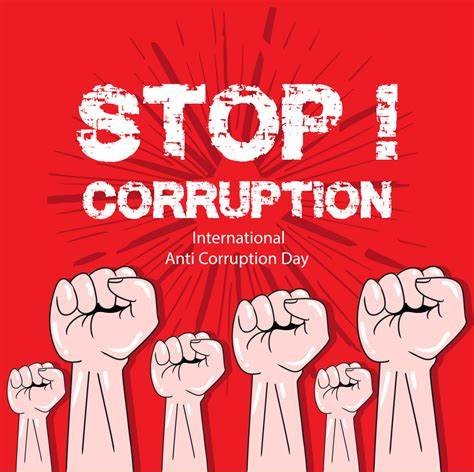 Today 9th December is International Anti-Corruption Day. It is commemorated worldwide and antigraft agencies of sovereignty nations usually localize the commemoration by engaging stakeholders and rekindle efforts in curbing corruption.

The Assembly also designated 9 December as International Anti-Corruption Day, to raise awareness of corruption and of the role of the Convention in combating and preventing it.  The Convention entered into force in December 2005.

Though there are international, regional and subregional bodies in the fight against corruption, localizing or domesticating the fight is indispensably important. Countries have different names of their anti-corruption entities. The United States has the Public Integrity Section at the Department of Justice and others; the United Kingdom has Serious Fraud Office; Brazil has Comptroller General of Brazil; South Africa has National Anti-Corruption Forum; Nigeria has Economic and Financial Crimes Commission and more; Sierra Leone has Anti-Corruption Commission. The list goes on. In some countries, there is more than one agency fighting corruption.

Though The Gambia ratified the United Nations Convention Against Corruption (UNCAC) in May 2014, the small West African nation is yet to have an antigraft body. The 22-year rule of ex-president Yahya Jammeh was widely perceived to be dictatorial and thus many democratic and accountability institutions were not given consideration.

Efforts Of The Incumbent Government

The President Adama Barrow led government has made moves in legislating an anti-corruption act and establishing a national institution responsible to fight graft in the country. The said draft bill awaits the approval of the national assembly.

Recently, the country’s Solicitor General at the Ministry of Justice, Hussein Thomasi led a delegation to the Republic of Sierra Leone to study the legality, mandate, activities and operations of Sierra Leone’s Anti-Corruption Commission (ACC) to better prepare for the establishment and operation of the same in The Gambia.

According to Thomasi, the engagements provided rich and comprehensive insights which are instrumental in running the much-anticipated Gambia anti-corruption body.

Importance Of An Anti-Corruption Law and Antigraft Agency

No matter how committed government is in the fight against corruption, it is generally ideal to have a national agency whose mandate is exclusively to lead the fight in curbing graft. Notwithstanding the indispensability of political will in the whole process, the existence of the said body sends a strong message to all Gambians and the wider world on the seriousness of the country in militating against corruption.

The same applies to the need for a law that comprehensively defines corruption; provides sanctions or punishments; establish and empower a national agency to prosecute corrupt persons and recover state resources lost to corruption.

Though the police can investigate crimes and prosecute offenders, having an anti-corruption law and institution is a semblance of seriousness and determination in mitigating corruption.

The recent global corrupting rating is Transparency International’s 2020 Corruption Perception Index (CPI) in which The Gambia is rated 102 of 180 countries. The 2021 index is expected in January 2022.

Interestingly, even though The Gambia does not have an anti-corruption body and a defined law that speaks to that effect, the country performed better in the 2020 ranking than many countries with antigraft establishments.

Also, the investigation and prosecution of corrupt officials may drastically discourage the committal of corruption-related offences which have the potency to destroy the fabrics of society and render the majority of the population poor, vulnerable and always dependent.

The enactment of the draft anti-corruption law, formation of its implementing body and the needed political will may cause the country to be enviable in the fight against corruption in the subregion.