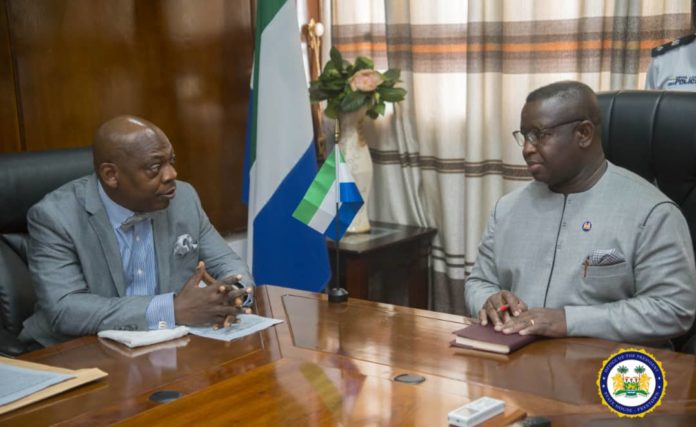 State House, Freetown, Wednesday 30 January 2019 – The Institute of Chartered Accountants Sierra Leone, ICASL, has called at State House to pledge their unflinching support to the vision and goals of the New Direction Government and to commend its stance on corruption.

ICASL was formed by an Act of Parliament on 12 May 1988 with an overarching mandate to promote and regulate the accountancy profession in Sierra Leone and to ensure integrity, objectivity, independence, confidentiality and professionalism in the accounting profession.

President of ICASL, Buffy Bailor, said they were aware of the commitment of the New Direction government and the strides already being made towards making Sierra Leone a better place for all, adding that as an institute they were ready and willing to be part of the change that is already the hallmark of the new government.

He said as part of their demonstration of commitment, they had been working closely with the Minister of Finance and had already signed an MoU to further cement their relationship and mutual collaboration for the advancement of the development of Sierra Leone. He noted that they possessed the requisite skills and competencies required to tackle issues and proffer suggestions to enhance transparency and accountability in the country.

“Mr President, we are aware of and are supportive of your fight against corruption; we can be strong partners in this fight by our inclusion in board oversight processes in the public sector. Chartered Accountants are men and women of integrity and I assure you that your trust in us will not be misplaced.

“As an institute, we are aware of the impending Commissions of Inquiry. We wholeheartedly support the fight against corruption and we believe that the commissions will serve as a strong deterrence to corruption in Sierra Leone. Congratulations sir, on successfully launching the commissions yesterday,” he said.

He also disclosed that the Institute had held a one-day training workshop on tax exemptions and its impact on the economy with a position paper being shared with the Ministry of Finance, adding that that collaboration had contributed to the appointment of the Institute on the Committee that was set up by the Ministry of Finance on the Review of Duty Waivers and Tax Concessions.

In his brief response, President Bio said he had made a lot of promises during his campaign on behalf of Sierra Leoneans, knowing very well that there were other well-meaning citizens who would join his transformative. He said he knew that he could not do it alone and would need the collective support of everyone.

He added: “We have suffered a lot and still do not have much to show for the minerals we have. We want to collectively move on now and make the necessary changes we need as a nation. I am happy that you have come on board and I am also excited that I have a partner in you in the fight against corruption.”