‘I Will Build 4,000 Affordable Houses Each Year, Whether You Vote for Me Or Not’ -Yusupha Dumbuya 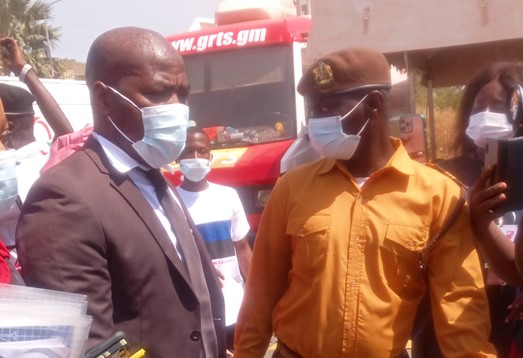 The presidential candidate and secretary-general of the newly registered Democratic Party (DP) Yusupha Dumbuya has officially presented his nomination papers to the Independent Electoral Commission (IEC) here at Election House.

Speaking to the press immediately after completing the process he promised to build 4,000 affordable houses each year whether he is voted for or not.

“We have a serious problem. What have we been doing for 53 years; does it take that long to make a country of about 1.7 million people?” he asked rhetorically.

He further noted that it is impossible to develop the economy if corruption cannot be tackled adding that the country needs to deal with a system change before it can deal with the issue of corruption. This is where he says he comes in to take care of the people and rid the system of corruption.

He promised that everywhere in The Gambia will light up in 2 years, when he becomes president.

“Everywhere in The Gambia will light up in 2 years, when I become president. I have already agreed with foreign partners on this. I will also improve housing for the poor,” he said.

He affirmed his policy of gender inclusion saying in his political party 60% of women hold positions.

Yusupha Dumbuya was born and brought up in Banjul The Gambia but his parents originated from Kerewan Samba Sira in the Central River Region. He is pursuing a doctorate in accounting and business studies at the University of Maryland in the USA.