I Have Brought Development to This Nation, and I Will Continue in That Direction’- President Adama Barrow 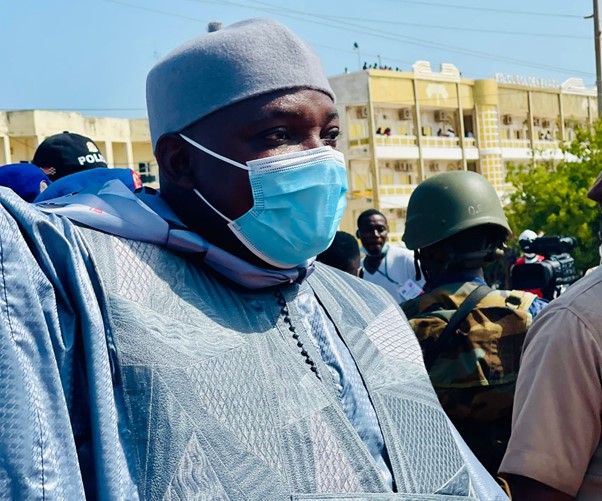 The President of The Gambia and Presidential Candidate of the National People’s Party (NPP) Adama Barrow has said that he is a democrat and he believes in the principles of democracy and the rule of law, indicating that he has been in office for five years and has brought development to this nation, promising to continue in that direction.

He started his address to the media by extending his condolence to the bereaved family of party supporters who died yesterday as they made their way to the nomination venue at Election House.

“I am a democrat and I believe in the principles of democracy and the rule of law. I have been in office for five years and I have brought development to this nation, and I will continue in that direction,” President Barrow said.

“I have already fulfilled all requirements, we play by rules and regulations and it is now left with the IEC to do their job,” President Barrow said.

He maintained that they (NPP) are in alliance with the APRC in the best interest of the country, national security and development.

Adama Barrow was born in Mankamang Kunda, a village near Basse Santa Su on 15 February 1965 and is the third and current President of The Gambia. He attended Crab Island Secondary School and the Muslim High School.

Barrow was then chosen as the UDP candidate in the 2016 presidential election. It was later announced that he would stand as an independent with the backing of the opposition group Coalition 2016 (a coalition supported by the UDP and six other parties).

Barrow won the 2016 presidential election with 43.34% of the vote, defeating long-time incumbent Yahya Jammeh. Jammeh initially accepted the result, but later reneged on this, and Barrow was forced to flee to neighbouring Senegal. He was inaugurated at the Gambian embassy in Senegal on 19 January 2017, and Jammeh was forced to leave the Gambia and go into exile on 21 January. Barrow returned to The Gambia on 26 January.