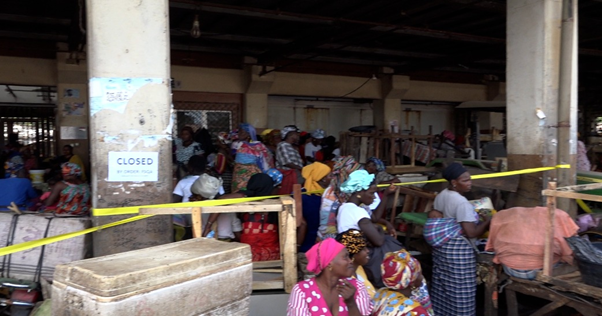 The Food Safety and Quality Authority of the Gambia on Wednesday 1st June 2022 ordered the closure of the Brikama Fish Market due to its unhygienic condition.

The closure of the fish market is as a result of the stagnant stinking water which causes unpleasant odor in the market and its surroundings.

The authority has it that, the market is not healthy for selling of food products and thereby ordering the closure of the market.

Last week, the Minister of Works during his six-day nationwide familiarization tour visited the said market.

He was welcomed by stinking waste and other unfavorable conditions in the market.

In this regard, the Minister promised to work with the market and local authorities to give the Brikama Fish Market a facelift for vendors and buyers.

Foday Manjang, the President of the fish market however said the closure of the market has a serious setback, noting that they would experience severe financial losses as their survival depends on the sales they make in the market.

Manjang described the closure of the market as too prompt, adding that there was no communication prior to the said action.

“The Food and Safety authoritie came to us unexpectedly and ordered the closure of the market. Fish is different from other food products as it is easily perishable. We would loss over One Million Dalasi worth of fish,” Manjang expressed.

He said since the incident occurred, the Ministry of Fisheries has never visited them to know their problems as they pay regular dues to the Ministry.

Abdoulie Touray, the Financial Accountant of the fish market said the poor sanitary condition is caused by the lack of sewage system in the market.

“The government should help us with proper sewage system or a safety tank to properly dispose waste. The Ministry should come to our aid in oder to make the market conducive,” Touray said.

Area council and market authorities are expected to do a massive cleansing exercise in the market to enhance proper hygiene and safety.

The Brikama Fish Market lacks proper sewage system which causes waste to stuck in and thereby causing offensive odor at the displeasure of vendors, buyers and passers-by.