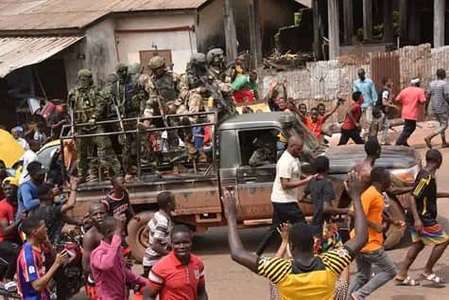 Human rights activists drawn from the length and breadth of the African continent, while brainstorming on the factors triggering military overthrows of democratically elected governments, admitted that coups are not a solution to citizens’ grievances, but it is a signal of poor governance by an incumbent government.

Activists who delivered their statements highlighting their country’s scenarios called on the Economic Community of West African States (ECOWAS) and the African Union (AU) to institute more robust measures to ensure that African leaders adhere to term limits and rule within democratic frameworks to avoid unconstitutional takeovers.

The Director of Policy and Engagement, Open Society Africa, George Kegoro, spoke at length on factors leading to military coups in Africa. He further asserted that people’s anger towards a poor system of governance often leads to coups but said it is not the best option.

“People need human security, which discusses to make life bearable, such as security for hunger, physicality, and social protection. If these lacks, that leads to a response which brings about coups,” he said.

The executive director of the African Center for Human rights studies Mrs Hana Forster pointed out that an unconstitutional overthrow by the military cannot be the appropriate remedy, but it indicates a justifiable problem in incumbent governments in Africa.

Mrs Forster also dilated on curbing protests in Africa while calling on governments to ensure that citizens have the right to protest.

“We have to have a way of dealing with protest and conflict in general in Africa. There are so many triggers of conflicts around us but how do we together find a solution to it,” she said.

Mrs Hannah Foster stated that the convergence is an opportunity to bring to the attention of the African Commission on Human and People’s Rights trending issues about instability and conflict in African Union member states through resolutions and recommendations.

Currently, there are military governments in Mali, Guinea Conakry, Burkina Faso, and Chad. The Republic of Mali experience double coups and Guinea Bissau as well experience an attempted coup.

The Economic Community of West Africa States (ECOWAS) and the African Union (AU) made numerous calls for the total abolition of military takeovers but couldn’t materialise due to poor governance across Africa, the violations of the rights of citizens and ignoring the presidential term limits.

Other activities from South Africa, Ghana, Kenya and other African countries spoke on democracy and good governance in Africa.