How Gambia Reach Round 16 In The AFCON 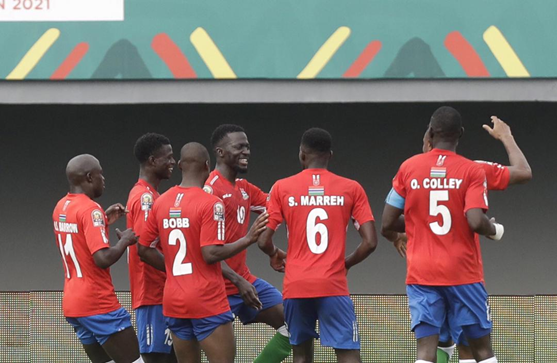 Gambia’s national male football team (the Scorpions) have made it to Round 16 of the ongoing Africa Cup of Nations (Afcon 2021) in Cameroon.

Also, Gambian forward Musa Barrow’s 90-minute penalty against Mali helped the Scorpions to secure a draw. The team had three goals in their three matches and conceded only one goal against Mali.

The Scorpions started the game very strongly in Limbé. Barrow found Ablie Jallow who controlled the ball from the right before putting a strike with his left foot into the net of the Tunisian goalkeeper.

The Scorpions made their first encounter against Mauritania on 12 January at Omnisport Stadium in Limbe in Cameroon and won the game 1-0 making it their first victory in the tournament. The Scorpions later played and drew against Mali on 16 January at Omnisport Stadium in Limbe where it shared equal points at a time when Mali was leading the game in the 79 minute with Musa Djenepo’s spot kick before Musa Barrow equalized for the Gambia in the 90 minute.

In the third and final group stage game with Tunisia on Thursday 20 January, The Scorpions won by 1-0 through Ablie Jallow’s stoppage time strike that earn Gambia a shocking victory.

Now the boys are through to the knockout stage (Round 16) with seven points and will be playing against Guinea on Monday 24 January 2022 at Bafoussam in the Western Island of Cameroon. A win for The Gambia will help them through to the quarter final stage of the tournament.

Share
Facebook
Twitter
WhatsApp
Linkedin
Viber
Previous article‘The Tasks Ahead Are Many, Complicated and Difficult’-Barrow Acknowledges; But Reaffirms His Commitment to Tackle Them
Next articleHigh Court Orders Suspension Of KMC Inquiry, Pending Decision Of The Court