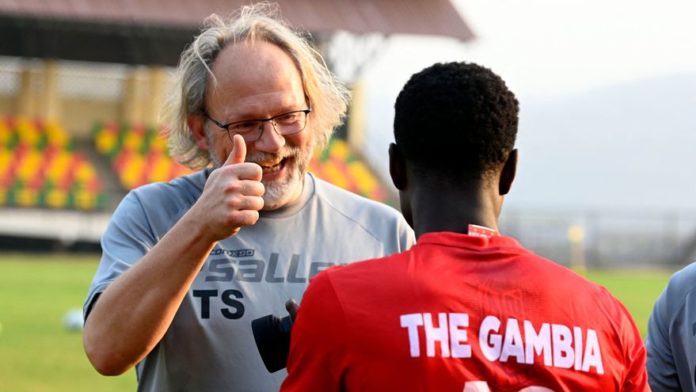 By: Chris Evans [The Set Pieces]

Tom Saintfiet and his players are under attack, with only a cluster of soldiers standing between them and a group of angry fans. Surrounded by seething supporters all around the stadium, there’s little more the Gambia boss can do but take cover from the objects being hurled his way.

It’s 2018 and the Scorpions have just lost 1-0 to Togo, the first defeat of Saintfiet’s short reign as head coach of the West African nation.

After a pair of draws in his opening two matches in charge, the Belgian could have been forgiven for thinking he’d made a solid start considering Gambia hadn’t won a competitive match for five years prior to his appointment. But as he’s marched off the pitch under armed guard, it’s clear he has a lot more to do to earn the fans’ appreciation.

“In my third match, we lost 1-0 at home to Togo and that’s when we saw the passion of the Gambia fans,” recalls the well-travelled coach.

“We couldn’t leave the pitch and the army had to come with shields because the fans were throwing bottles and stones at us. We’d lost 1-0 to Togo, who were 50 positions better off than us in the world rankings at the time and Gambia hadn’t won for five years, but we still had stones and bottles thrown as us.”

Fast forward four years and not only has Saintfiet managed to turn around the swell of negative emotion he faced after that Togo defeat to remain in charge, but if he stood in the midst of Gambian fans today, he’d be mobbed as a national hero instead.

The turnaround has been stark. After finally breaking Gambia’s long wait for a win with victory over Benin a month after losing to Togo, Saintfiet’s side upset the odds to qualify for this year’s African Cup of Nations – the country’s first ever major tournament – as the lowest-ranked nation to ever play in the competition.

Gambia wasn’t there to merely make up the numbers, though. Ranked 151st in FIFA’s rankings before the tournament kicked off, the Scorpions drew with Mali and beat Tunisia on the way to topping their group, before getting past Guinea in the last-16 to set up a quarter-final tie with hosts Cameroon. A 2-0 defeat in Douala would see the fairy tale end there, but it marked a monumental achievement.

“The reason I stepped in [in 2018] was because I really believed there was more quality in Gambian football than people thought,” Saintfiet explains.

“In the first few weeks I was here, I said to the president and vice president, ‘we will qualify for the African Cup’ and they said ‘calm down, calm down, it’s just the first match we haven’t lost in years’. We laugh about it now, but it’s true.”

Saintfiet’s confidence came from a deep understanding of what it takes to manage a smaller nation, with Gambia the 48-year-old’s 12th international coaching job – 10 as head coach of a senior side – in a career that has seen him work in four continents. He’s taken jobs in several lesser-vaunted nations, including Yemen, Namibia and Ethiopia, and faced an array of challenges along the way.

One of the most extreme was after taking the Zimbabwe national team job in 2010 when he was tipped off during a training session that the state police were coming to arrest him due to a discrepancy with his visa. Unable to go back to his hotel, Saintfiet holed up nearby for a few hours before crossing the border under the cover of darkness into neighbouring Botswana to evade capture.

It’s made for an eclectic CV and one that sometimes draws ridicule for the amount of job hopping he’s done in the past two decades. To fully understand Saintfiet’s numbers, it’s important to listen to the context, he reasons.

“Sometimes you don’t have the choice and it’s me who always accepted the jobs, so I don’t have to blame other people for it,” he says. “In Namibia, I took over two games from the end [of a qualification campaign] and immediately got good results and then it took a while before the next qualifiers started.

“And in other countries, I signed a three-month deal in Malawi, in Ethiopia it was for five months, in Bangladesh it was three. These countries say they don’t have budget for a foreign coach or even a coach if they don’t have matches for five or six months after qualifying ends.

“There are things I accept, but sometimes I’m not happy because people judge my CV and say ‘this guy never stays anywhere very long’ but they don’t know the ins and outs of it.

“Like I said, in Malawi, 10 months after I left they still hadn’t appointed a new coach because there were no games coming up. That was agreed before I signed a three-month deal, so I did my job and did my three months. On the other hand, it’s also good that I have the experience of working in all these countries because it makes me a stronger coach right now.”

There’s an argument that Gambia are now reaping the rewards for that. Upon taking the job in 2018 – this time on a longer-term deal – Saintfiet started laying foundations.

A new team manager was hired as part of a plan to instil greater organisation off the pitch, with Saintfiet insisting the squad stayed in better quality hotels, booked on “better” flights and had tighter processes to make playing for Gambia a slicker and more enjoyable experience.

With that side of things in check, the Belgian coach began to overhaul the on-pitch philosophy, transitioning the side from the attractive tiki-taka style that had been easy on the eye, but ultimately led to the Scorpions losing far more often that not.

Under Saintfiet, Gambia would be more tactically disciplined and harder to beat. Once a more defined structure began to take shape, the next step was to identify new players to join the revolution.

“In the past three-and-a-half years, I’ve let 34 players make their debuts for Gambia – not all of them made it, but that’s quite a lot,” Saintfiet tells The Set Pieces.

“In my first year, I lived full-time in Gambia, watched a lot of local league players, saw a lot of quality there and then started moving around the world to visit a lot of players, some who were known to us and some double-nationality players to convince them to play for us, like Saidy Janko and Noah Sonko Sundberg.”

Recruitment might be a skill more familiar with club managers, but in recent decades it’s become the territory of a proactive international coach to increase the talent pool of smaller nations too.

“I travelled a lot and we assembled the team,” Saintfiet says. “I did all the work myself, but I’m used to that. First of all, we have the internet where you can find a lot of players all over the world. If you know the Gambian names… you can start working on that.

“Then it’s a case of getting in contact with the player and the club, visiting them, seeing if they’re interested, watching if they’re good enough. We have a lot of players in Norway, Sweden and Switzerland – we have a few born in England, born in Germany and Scandinavian countries. That mixture helps.

“It’s a very intense job and people don’t always see that. I did everything myself and paid for my own flight tickets and hotel costs to travel around and visit players. It’s my passion for the job and my desire to achieve something.”

With those building blocks in place, perhaps it wasn’t such a big surprise that Gambia made it from the preliminary phase to top their AFCON qualification group ahead of higher-ranked Gabon, Angola and DR Congo.

If that was meant to be the hard bit done, the debutants were confronted with a host of challenges that punctuated their tournament, making their run to the quarter-finals even more improbable.

A pre-competition training camp in Qatar was blighted by a Covid outbreak, which left Saintfiet working with a skeleton coaching team and as few as 12 players and no goalkeepers available to take part in training sessions. It wasn’t until four days before Gambia’s opening match against Mauritania that they could play a full training match with a full complement of players.

After making it to Cameroon, there were further distractions at Gambia’s team hotel in Buea, where soldiers stood guard 24/7 amid security concerns triggered by friction between the government and armed rebels in the area.

And the night before their last-16 tie with Guinea, Gambia’s squad was struck down by food poisoning that left several players either unavailable or nursing illness right up to kick-off – leading Saintfiet to blast tournament officials for not providing AFCON’s smaller nations with the same quality of facilities as the leading lights. But there was no chance of the players letting the setbacks get on top of them.

“All the negative things and the bad luck we had, we used in a psychological way to become stronger. I’m not a coach who likes to talk about excuses,” Saintfiet counters.

“We created the group and in the outside world we made clear that we were underdogs and we were lowly ranked, but inside [the camp] our ambition was to become African champions. We were also realistic, but we were there with ambition and we really wanted to get the best out of it.

“With my team, we put together motivational videos of Denmark in 1992 becoming European champions, of Greece in 2004 and Zambia in 2012 becoming African champions. We showed the players them before every match and we really built up a team that had confidence in themselves.

“We weren’t there just to be there, we were there to compete with the best and show ourselves as the best side. When we won against Mauritania, there was a big party. I told all the players and staff, every point we won we had to celebrate… we created a flow and a belief in ourselves and the mental part was very important with that.”

The run may have ended in the quarter-finals, but Saintfiet’s Gambia were celebrated as heroes back home. Complications with return flights meant only a few players and staff were able to bask in a glorious homecoming, although the impact of the success has been felt nonetheless.

“The impact of what we did Gambia was really huge,” Saintfiet adds. “For Gambians all over the world can finally say ‘we are from Gambia, not from Zambia’ because there is a joke that people think they’re not from Gambia but from Zambia. But now people have finally started to know The Gambia and it is a huge honour to be part of that and the coach of that.”

One thing’s for sure, when Saintfiet next returns to Gambia, the greeting will be much friendlier than that night against Togo in 2018.