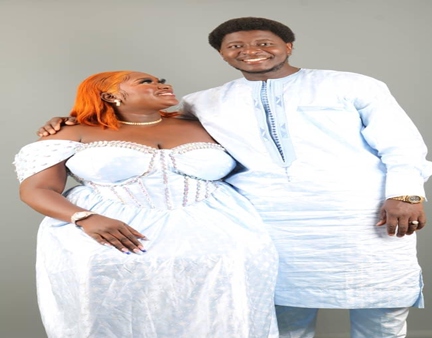 Before June 2020, Bintou Jatta was not a singer. She never imagine being a vocal singer or possessing the talent to be one until when she gets married to her sweetheart, Baddibunka, an afro manding singer in the Gambia.

Born Bintou Jatta but now called BinBunka, a name which is an abbreviation of Bintou and Baddibunka.

For close to a decade, Baddibunka’s musical career was in dark. He literally left the music industry after gracing the apex in industry with his Afro-manding style of the songs he performed in huge musical concerts across the country and eventually launched his debut and thrilling ‘Jamb sang sang’ album in 2011. Since after that launching, he gradually went to comma as a musician.

However, after marrying Bintou, Baddibuka’s musical career is getting back in shape.  Bintou doesn’t only support Baddibunka as a good wife, but she now sings with her husband and the couple has recorded a fascinating 8 tracks and all these are videos.

“We have eight songs. From June, we will release all these songs every month with a video”, Binbunka joyfully told The Fatu Network.

The name Binbunka is given to her by Baddibunka.  When the husband discovered that she can be a very good singer with the voice she has, he encouraged her to start singing.

“First he started by encouraging me.

He told me how unique my voice is and then made me feel so comfortable.

Then he started writing songs for me” she uttered on how her musical career initiated.

“Badibunka wasn’t heard for so long. I came and made him stand back on his feet gave him a lot of courage because  I know he can do it. I know he can rule the Afro manding industry and yes! he is back on it.

When I was doing all this, I wasn’t fully in with the music thing until he feels I can do it too then we hit it straight.

Another plus is we are the first young couple singers in The Gambia which is another big plus in the music industry side”,  BinBunka proudly told TFN.

The couple is bracing up for an album anytime soon.

Since they started singing, they have recorded eight songs. One has been released already ‘Futuwo’ (marriage) and  ‘Nmansong’ is set to be released tomorrow June 3 with a video. The song talks about the relationship between the couple that no one can ruin.

She told the Fatu Network that the Bunkas will soon hit the prime and Baddibunka will be honoured again as the best Afro Manding Gambian singer.

These are the eight songs that the couple did but only ‘Futuwo’ has been released.