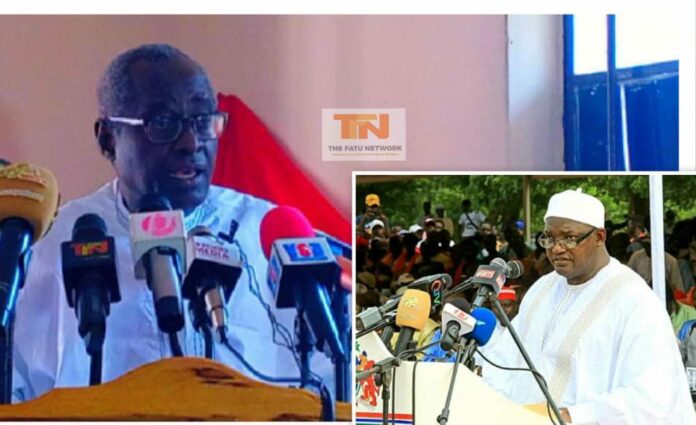 Halifa Sallah, the Party leader and Secretary General of People’s Democratic Organizations for Independence and Socialism (PDOIS), has claimed that the Adama Barrow-led government has been engaged in a trials-and-error form of governance rather than strategic governance backed by a transformative agenda.

The PDOIS supremo said this while speaking to the press on the challenges The Gambia is faced with and ways forward.

The former spokesperson of the 2016 Coalition, which ousted former president Yahya Jammeh from power, said his former ally in the struggle is leading a government that doesn’t have a strategic plan tailored to a transformative agenda.

“… to us, and maybe too many, we see that the government in office is more engaged in a trial-and-error form of governance than a strategic one directed by a transformative agenda. It is an opinion. They may wish to disagree, but we want a fresh conversation, a constructive one,” the seasoned politician uttered.

The former National Assembly Member (NAM) for Serre Kunda Constituency said the Government can engage them in a debate if they disagree with the claim that they are engaged in a trial-and-error form of governance, which he said his party intends to do now towards the 2026 presidential elections.

“They can engage us in a debate and that is what PDOIS intends to do in this coming four years going to five. For the debates to take place so that the Gambian people can be cleared regarding the future of their lives and that of their children’s life,” he pointed out.

According to the politician, who has been in the frame of Gambian politics from the first republic to date with a sharp institutional memory as one of the oldest political parties in the country, PDOIS will continue speaking to the power, and they will never be silent. He asserted that the party will be gauging and scrutinizing the government to do what is in line with the desire of the Gambian people.

“We mentioned as early as 19th January 2022 that we will be beginning this new journey and that we will not be silent in gauging, scrutinizing, and restraining the government in office to do what is in line with the aspirations of the people.
Speaking as we have always done in the interest of the Gambian people. “

Speaking to the press, Hon. Sallah said that PDOIS is the voice of the voiceless in the country, and they have stood for many people during the past regime. He urged Gambians to take part in the affairs of the public offices, noting that the country is owned by them, and they entrust power just for a time.