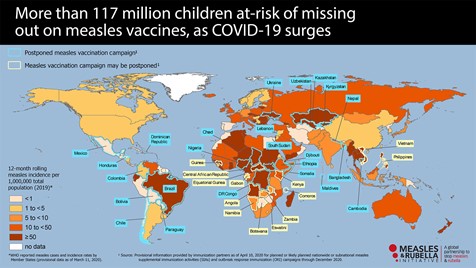 The World Health Organisation (WHO) and the U.S. Centers for Disease Control and Prevention (CDC) have reported that the Global Progress Against Measles is threatened because of the ongoing COVID-19 Pandemic.

The institutions say the world has reported the largest increase in unvaccinated children in 20 years leaving critical gaps in disease surveillance, thus increasing the risk of measles outbreaks and ultimately putting lives at risk.

The COVID-19 pandemic caused significant disruptions to immunization services and changes in health-seeking behaviours in many parts of the world. While the measures used to mitigate COVID-19 – masking, handwashing, distancing – also reduce the spread of the measles virus, countries and global health partners must prioritize finding and vaccinating children against measles to reduce the risk of explosive outbreaks and preventable deaths from this disease.

Measles is one of the world’s most contagious human viruses but is almost entirely preventable through vaccination.  In the last 20 years, the measles vaccine is estimated to have averted more than 30 million deaths globally. Estimated deaths from measles dropped from around 1,070,000 in 2000 to 60,700 in 2020.  The estimated number of measles cases in 2020 was 7.5 million globally.  Measles transmission within communities is not only a clear indicator of poor measles vaccination coverage, but also a known marker, or ‘tracer,’ that vital health services are not reaching populations most at risk.

According to the report, “While reported measles cases have fallen compared to previous years, progress toward measles elimination continues to decline and the risk of outbreaks is mounting. During 2020, more than 22 million infants missed their first dose of measles vaccine – 3 million more than in 2019, marking the largest increase in two decades and creating dangerous conditions for outbreaks to occur.  Compared with the previous year, reported measles cases decreased by more than 80 percent in 2020.”

However, it reports that measles surveillance deteriorated with the lowest number of specimens sent for laboratory testing in over a decade. Weak measles monitoring, testing and reporting for measles jeopardize countries’ ability to prevent outbreaks of this highly infectious disease. Major measles outbreaks were reported in 26 countries and accounted for 84 percent of all reported cases in 2020.

Kevin Cain is MD and CDC’s Global Immunization Director, he said, “Large numbers of unvaccinated children, outbreaks of measles, and disease detection and diagnostics diverted to support COVID-19 responses are factors that increase the likelihood of measles-related deaths and serious complications in children.”

Adding that, “We must act now to strengthen disease surveillance systems and close immunity gaps, before travel and trade return to pre-pandemic levels, to prevent deadly measles outbreaks and mitigate the risk of other vaccine-preventable diseases.”

“While reported measles cases dropped in 2020, evidence suggests we are likely seeing the calm before the storm as the risk of outbreaks continues to grow around the world. It’s critical that countries vaccinate as quickly as possible against COVID-19, but this requires new resources so that it does not come at the cost of essential immunization programs.

Routine immunization must be protected and strengthened; otherwise, we risk trading one deadly disease for another,” said Dr Kate O’Brien, Director of WHO’s Department of Immunization, Vaccines and Biologicals.