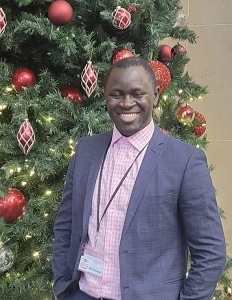 Ahmad Gitteh, an aspiring candidate for the position of Chairmanship in the forthcoming Brikama Area Council elections, has promised to help 50 youths or groups with at least 150 million Dalasi within five years for start-up businesses and build proper mini stadiums and multipurpose centres for the young people of West Coast Region if elected as the Chairman of the Brikama Area Council.

Gitteh, who made his intention clear and, on several occasions, his desire to contest for the biggest office in the region, told The Fatu Network that West Coast Region has the largest youth population in the country and gives youths D30 Million yearly in different businesses opportunities will help in establishing businesses and employment for so many young people in the region if he becomes the chairman of the Brikama Area Council.

“We will invite young people to come up with business ideas in technology, agriculture, health and so on. The best ten individuals or groups will receive a combined total of about at least D30 million dalasi for a startup business,” he explained.

He added that the ten individuals or groups may not all succeed, but if 40% succeed, it will guarantee a long and medium-term creation of employment and income generation for them.

The vibrant politician, who remains very hopeful of winning the seat, also said that if elected as the chairman of the biggest local government area in the country, he will engage in building recreational centres in the region. He pointed out that the region does not have proper mini-stadiums or conference centres across.

“Children need to have well-developed playgrounds across the region. West Coast has no proper mini stadium, no proper multipurpose centre, and no proper conference centre that is modern apart from Sir Dawda Kairaba Conference Center. We need all of these,” he told The Fatu Network.

According to Gitteh, West Coast Region has the potential to generate rates of close to a billion dalasi annually. Thus, if elected, to effectively make the best use of the potential billion-dalasi revenue collection in a year, he will first properly train his council staff and introduce a proper digital platform as well as engage the central government in the valuation of private and business entities in the region. He disclosed to The Fatu Network that he already has experts who are willing to do that.

He added that his exposure in Canada will help him use his connections to build communities that will keep the young people in the region at home and contribute their part in developing the country.

“The other thing is that we will use our connections with international bodies and countries such as Canada, in my case, to help us with building a community that will keep our youths at home and contribute to building our country and not risking life through the treacherous desert.”

With numerous doubts whether NPP will approve Gitteh’s application under the party’s ticket, he confirmed to The Fatu Network that his team submitted his application to Lamin Jatta, the regional chairman of NPP last week. However, NPP is currently busy engaging other political parties they have an alliance with on sharing modalities for different wards and regions as of now. Gitteh, however, remains upbeat about winning the party’s ticket.

Share
Facebook
Twitter
WhatsApp
Linkedin
Viber
Previous articleUnemployment and the Paradox of an African’s Misery on Receiving Salary
Next articleSmashing gender bias in a male-dominated industry: Story of two sisters who work as tyre technicians to support family