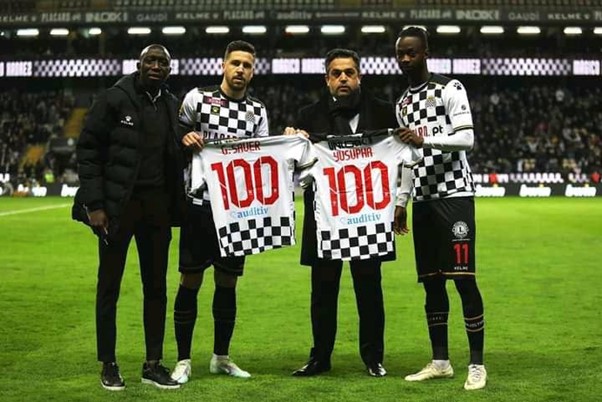 The Gambian soccer player Yusupha Njie a playmaker at the Portuguese top league, Boavista has been awarded a commemorative victory after he played his 100th Cap for his Portuguese club.

Yusupha Njie is the son of the late Gambian Soccer legend Alhaji Momodo Njie also known as Biri Biri. He was a Gambian footballer who played as a right-winger. He most notably played for Sevilla FC in Spain and Herfølge Boldklub in Denmark during his career.

The term Cap in Soccer is used to describe how many international matches a player appeared in. Players’ match games are awarded for each game played.
The Gambian international left Winger expressed during an online interview.

“It is an amazing Journey to achieve my100th Cap with my club Boavista,” he said.

“I am so proud of this Milestone achievement in my football career,” he said.

The son of the late legend Biri Biri poured out words of appreciation and support for his club management and teammates for collective success.
‘The Going Never Stops’, he further said with a strong voice and confidence that he is physically and mentally fit to achieve his goals in better shape than now.