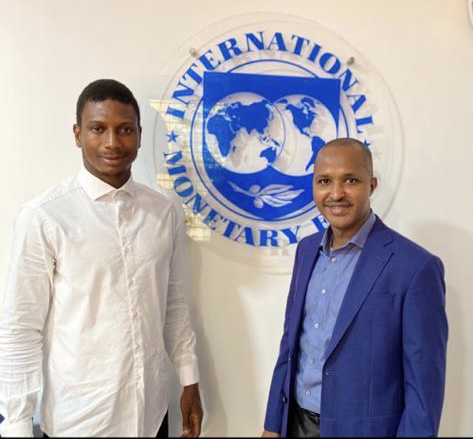 The country’s goodwill Ambassador for Sport, Tijan Jaiteh, has engaged the Resident Representative of the International Monetary Fund (IMF) to the Gambia, Mamadou Barry, on issues central to the promotion and development of sport in the country.

Ambassador Jaiteh called on the IMF Rep to support sporting disciplines in the country as sport plays a crucial role in positively engaging the minds of youths and divert their attention from engaging in antisocial activities.

He added that sport is a powerful change agent that is used across the world to develop and transform nations and sporting personalities; noting that sport shapes the future of youths and helps in reducing their exposure to illegal and risky traveling to Europe and other developed parts of the world.

The Goodwill Ambassador highlighted successes and challenges in promoting sports and youth activities in various communities.

Welcoming Ambassador Jaiteh, the IMF Rep, Mamadou Barry, expressed appreciation for the courtesy visit, explaining that the IMF is supporting The Gambia particularly during the prevailing difficulties posed by the COVID-19 pandemic.

He underscored the importance of youth development in addressing economic challenges such as unemployment and poverty.

Speaking to Journalists after the engagement, Ambassador Jaiteh disclosed that the meeting was fruitful, and that discussions were centered around how to improve and mobilize support for the development of a sport training complex for youths who desire a career in sport.

President Barrow appointing the former Scorpion captain, Tijan Jaiteh, as Sport Ambassador is still being described by many sport lovers in The Gambia as appropriate as he is someone who has spent his whole life in sport.