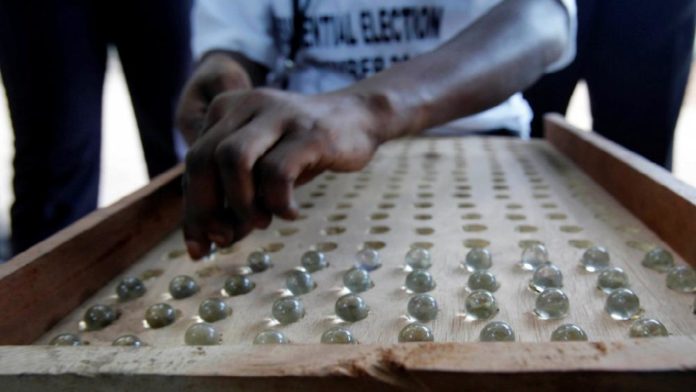 Though it may sound archaic to nationals of many countries which swapped from marble ballots to paper ballots half a century ago or even older, The Gambia [a highly touristic West African nation with 2.5 million people] is on record as the only country in the world still conducting elections using marbles to cast ballots.

With the marble system, each voter receives a marble and places it in a tube on top of a sealed drum that corresponds to the voter’s favoured candidate. The drums for respective candidates are painted with different colours corresponding to the party affiliation of the candidates and their pictures affixed to their corresponding drums. The system is practically considered to have the advantage of low cost and simplicity both for understanding how to vote and for counting. It also settles the issue of invalid votes which is evident in most paper-ballots-based elections, especially in poor countries with high illiteracy.

Just a month to the 4th December 2021 election, there are over 15 presidential candidates vying for the presidency. This means that over 15 drums are anticipated in each of the country’s 1,422 polling stations. Nomination for presidential candidates for the position of President of The Gambia is ongoing and is expected to end on 5th November. Though there are expected coalitions and some independent presidential candidates dropping out of the race, however, Gambia’s Independent Electoral Commission (IEC) has on it list 26 candidates going through nomination. If over 15 candidates are to contest for the presidency, it means the IEC would need about 25,000 drums or more to conduct the said elections. This is in addendum to the logistics and transportation challenges in conveying and handling other electoral materials in all polling stations across the country.

This will be logistically challenging for the Commission as getting, keeping and transporting [to and fro] such huge number of drums couple with other sensitive electoral materials has the potential effect of overstretching the Commission.

The prevailing circumstance has presented Gambia with the consideration of reconciling  between opening the democratic space by encouraging people [no matter the number] to participate in presidential, assembly and local council elections on the one hand and making the electoral job less weighty for the IEC on the other hand.