The Gambia continues to wallow in food insecurity as figures rise from 13.4 in 2021 to 26.5 in 2022, according to the October 2022 National Food Security Survey (NFSS), which represents a little over 100% increment. The WFP deputy country rep said the situation has worsened, looking at the trend from 2011. 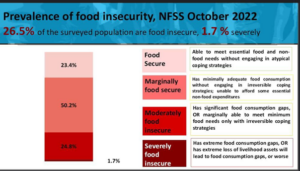 Over the past 10 years, the country has seen an upsurge in food insecurity. It only had a slight decline in 2016 from 11.1% to 8% in 2011. Since then, the Gambia has always seen sharp increase and now reaching double of the 2011 figures.

“We have one household out of 4 that are moderately food insecure; means that they have consumption gap or, need to use some irreversible coping strategies,” the WFP deputy country rep Malick Ndiaye said in a joint presentation with FAO at the IMF’s Regional Economic Outlook recently.

In terms of geographic distribution of food insecurity, CRR has emerged the highest where over one out of two households are affected by food insecurity, according to WFP. Malick Ndiaye said this is as a result of poor agricultural production; limited access to inputs; saltwater intrusion and others.

“That really, is kind of harming the capacity of households to produce what they need,” Ndiaye said.

The joint presentation by WFP and FAO recommended short and medium-term solutions like expansion of safety net to more vulnerable households; funding of livestock in the lean season amongst others as well as long-term solutions like prioritization of agricultural budget support; promoting food system and production etc.