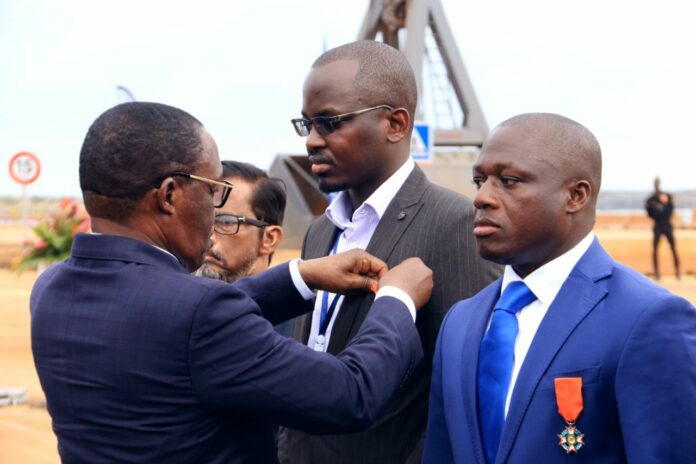 Ebrima Sawaneh, Group Chief Operating Officer of Arise Ports & Logistics, has received The National Order of the Côte d’Ivoire from the Ivorian Prime Minister. The honorary award of Ivorian knighthood (Chevalier de l’Ordre National) was presented to Mr Sawaneh on behalf of the President during the inauguration of a new seaport terminal in San Pedro city.

Arise developed and financed a new multipurpose industrial terminal in San Pedro, which represents an unprecedented growth opportunity for the country and the region, especially for the mining economic operators. A total investment of EUR173 million was made into this terminal, of which Ebrima led the team that raised EUR90 million from international banks.

Arise Ports & Logistics is a developer of port and logistics ecosystems that designs, creates, finances, and develops interconnected infrastructures with their integrated logistics services. The group consists of 3 port assets spread over 2 countries: Gabon and Côte d’Ivoire. In each country where Arise P&L is present, its mission is to support the growth of local economies, create jobs and transfer its skills to the national workforce.

“I am truly humbled by this recognition. Growing up in Saruja Village, the Gambia, I had many dreams and inspirations, but I never thought I would receive a knighthood from the government of Côte d’Ivoire. It is a great privilege to receive this award and an honour to work with many outstanding talents in & outside Arise Group. This recognition is also for my colleagues, board of directors, investors and business partners, and I would like to thank each of them for their commitment to the Arise mission. I am also grateful to my family for their support in enabling me to pursue a career.”

Since joining Arise two years ago, Ebrima has led the finance division of the port & logistics group and was given additional responsibility as the chief operating officer in April 2022. Prior to Arise, he was a vice president of finance in Africa Finance Corporation.

Alongside leading Arise, Ebrima is also driving skill development in the Gambia through Finance Leadership Forum, where he serves as the President. He is also an author and blogger and often writes about personal development, personal finance and small business management with the primary goal of supporting young Gambians.