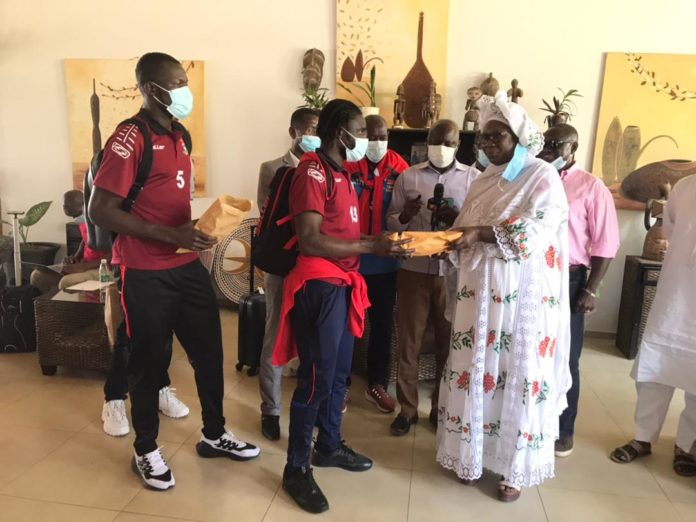 The Gambian Sports Veterans comprising former players and coaches on Thursday 6th January 2022, presented cash to the tune of two hundred thousand dalasis (D200,000) to the National Scorpions at Ocean Bay Hotel in Bakau. The presentation is meant to support the players ahead of the tournament in Cameroon.

Speaking at the presentation, Sheikh Ndure, Chairman of the sports veterans group said they are excited to support the Scorpions, noting that the cash presented to the team is an individual contribution from the sport’s veterans. He added that each player and official will receive Six Thousand Dalasi (D6000).

The presentation was witnessed by The Gambia Football Federation (GFF) President Lamin Kaba Bajo and other officials from GFF.

“We are very happy to see the success of the scorpions in the tournament. We have tried during our time to qualify the county for the African Cup of Nations (AFCON) but we were not lucky to do so. The Scorpions has made the entire country proud,” Sheikh Ndure Sports Veterans Chairman said.

Mr. Ndure noted that the presentation is to help the soccer players address some of their challenges.

Representing the team Pa Modou Jagne Team Captain and Omar Colley second team Captain, both expressed delight on behalf of the team while describing the gift presented to them as huge.

“As football players, our dream is to win trophies for our country.”
He further stated that the money given to them is the best gift and will further motivate them to do more for the country.

Pa Samba Jaw, a veteran coach also joined the players to thank the donors whilst calling on Gambians to support the team.