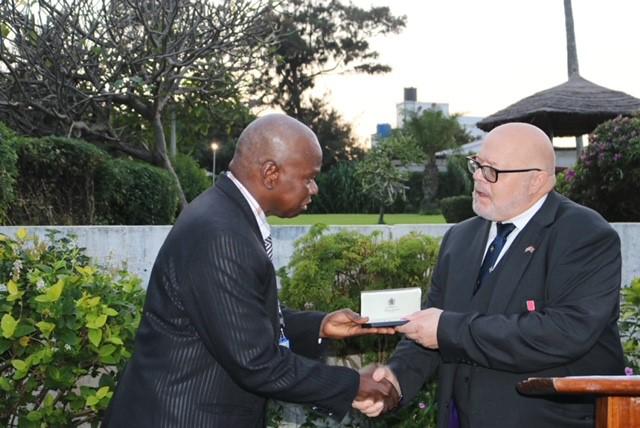 The British High Commission Banjul is delighted to announce that at a ceremony on Thursday 17 November 2022, His Excellency David Belgrove OBE, British High Commissioner presented an honorary award on behalf of Her Late Majesty Queen Elizabeth II to Mr Pierre Gomez in recognition of his outstanding service to the MRC.

Pierre Gomez MBE (Honorary Member of the Most Excellent Order of the British Empire) has been recognised for services to medical research in sub-Saharan Africa.

Pierre Gomez has given nearly 40 years of service to the MRC unit in The Gambia. He played a key role in establishing and sustaining surveillance systems which underpin important research discoveries such as the value of insecticide treated bed nets and seasonal malaria chemoprevention. This research has saved many lives across sub-Saharan Africa and helped establish the reputation of The Gambia as a centre of international research. Mr Gomez is known for his personal support and generosity to members of staff and the community in which he lives and works.

On receipt of the award Pierre Gomez said:

“I am very happy and grateful to be one of the recipients of the MBE Award today. This is a special honour for me and family, and most importantly my mother who has been of tremendous support to my career. This is a dream come true.
I would like to express my sincere gratitude to Professor Brian Greenwood and Professor Umberto D’Alessandro for their unflinching support, inspiration and recognition over the years. I am deeply honoured”

“This award reminds me of MRCG’s efficiency and response during the Meningitis, Malaria and Measles outbreak 1980 and 1990 respectively. This outbreak affected children and women in rural Gambia. MRCG’s response to these incidents inspired me to take a personal decision in 1986 to commit my life to supervising and maintaining MRCG Unit’s Household Demographic Surveillance System HDSS platform in a bid to Safe Lives and improve health care across sub–Saharan Africa.

Physically I am here with you all, but in spirit I am in Buckingham Palace receiving this award. I would sincerely like to thank all the Executives and individuals who made this event a success.”

Background to the UK Honours System

As ‘fountain of honour’ in the UK, the British Monarch has the sole right of conferring titles of honour on deserving people from all walks of life, in public recognition of their merit, service or bravery. This includes honorary awards to non-British nationals who through their ties to the UK have made an outstanding contribution.
Throughout history, monarchs have rewarded those who have shown service, loyalty or gallantry with gifts or titles. Until the beginning of the nineteenth century, only members of the aristocracy and high-ranking military figures could be appointed to an Order of chivalry, but from then onwards appointments were drawn from a wider variety of backgrounds.
Nowadays the Honours system rewards service in a wide range of areas, recognising outstanding individuals in their respective fields.

Pierre Gomez MBE would be available for interview about receiving the awards and the work for which they have been recognised.
If you would like to set up interviews or require further information, please contact Fatou Jassey, Press & Public Affairs Officer at the British High Commission: [email protected]
or on + 220 776 2138