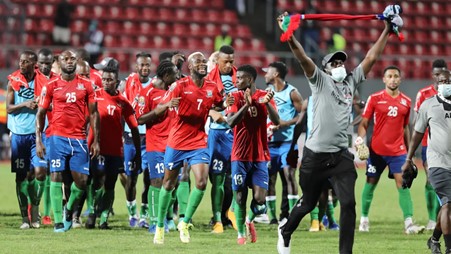 After two identical 1-0 victories in the opening match day, Gambia and Mali enter the second round of Group F matches with high hopes of another win that could see them paving the way towards the next round in style.

Gambia is still celebrating an opening win in their AFCON debut. Ablie Jallow strike gave the Scorpions a 1-0 win over Mauritania to start their first Africa Cup of Nations appearance on high skies.

Another positive result on Sunday will mean that Tom Saintfiet men are on their way not just for a historic debut but also for a fairytale second round appearance.

“We had a party to celebrate the country’s first victory. Now we are going to prepare the match against a big Malian team. We have 3 points, it’s already fantastic, but we have to continue. We will do everything to advance to the second round, and to give more light and promotion to The Gambia, the smallest country in Africa.”

“Proud to be in this group, I play in Italy, but this is something else, it is indescribable to live what we are living. With the offensive armada that we have, we will seek points against Mali and Tunisia to bring joy to the Gambian people. Our goal is to win, match by match.”

Mali Eagles defeated Tunisia 1-0 in what was one of the opening match day surprises. Mohamed Magassouba men secured a famous victory over Carthage Eagles to boast their hopes of a historic TotalEnergies AFCON campaign this year.

Another win over fellow West side Gambia might see The Eagles through, but they have to beware the Scorpions’ sting this time.

“We have started a construction phase and we are preparing for the future. Collective value is important to me, we aim to shine tomorrow against this ambitious Gambian. This generation can write its story, a happy story, I hope. Mali is on the quest for the supreme title. We are responsible for producing the show and winning, the rest does not concern us.”

“The morale of the team is at its highest, it’s very important to win your first game. we give everything with an irreproachable state of mind. We don’t play according to the opponent; we have a game philosophy. Our only objective is to do everything to win, our people deserve a consecration.”