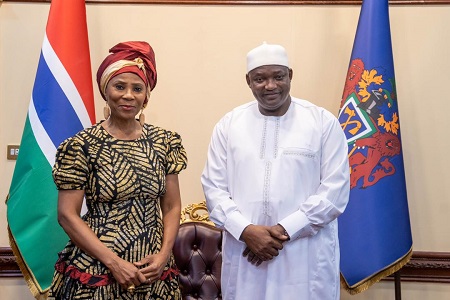 The Gambia will get access to a “loss and damage” fund that will be established for developing countries as one of the decisions made at the end of the UN’s Framework Convention on Climate Change Conference of the Parties (COP27) on November 20th, 2022, at Sharm El-Sheikh, Egypt.

“Gambia will now be one of those countries that can access our climate financing to deal with these kinds of issues,” the UN Assistant Secretary General and UNDP Regional Director for Africa said shortly after her visit to the State House where she met the President of the Gambia, Adama Barrow on Monday, November 21st, 2022.

Ms MAhunna Eziakonwa, who also serves as the UNDP Assistant Administrator is in the Gambia for a three-day working visit to interact with partners on UNDP Renewed Strategic Vision in Africa including its youth and women, climate change amongst others.

“Gambia is one of those countries that are vulnerable to the effect of climate change.”

“He [Barrow] said, for instance, not just the flood, but also the impact climate change has had on land and the capacity of land for productivity. All of these are damages that have been occasioned by climate change,” Ms Eziakonwa, told journalists at State House.

The UN Assistant Secretary-General also discussed a couple of issues with the President including Nationally Determined Contributions (NDCs) which she believes is an ambitious plan.

“To show how Gambia as a country will contribute to reducing emissions to 1.5 C, but also adapting to a greener pathway of development,” the UNDP Regional Director said.

Share
Facebook
Twitter
WhatsApp
Linkedin
Viber
Previous articleUNICEF ambassador Lindelof expresses joy over honour accorded to him in Gambia
Next article“We have plans to produce all the oxygen we need,” Gambia to address oxygen shortage