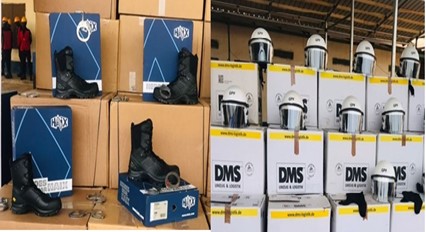 The Gambia Police Force (GPF) on Monday 21st February 2022, received a presentation of equipment worth Twenty Million Dalasis (D20m) from the German Police Support Team in The Gambia. The presentation was done at the Police Intervention Unit (PIU) headquarters in Kanifing.

The equipment include 2 of 3 Anti-Riot Vans (currently one more is on the way to The Gambia), 2 drones, 680 riot helmets, 10 laptops, 100 radios with equipment and 4 multiple radio charging stations.

The gesture is geared towards improving the overall operational skills of the police.

Delivering the keynotes address on behalf of the Inspector General Momodou Sowe, Deputy Inspector General of Police said the day marked a significant milestone in the collaboration between the Gambian Police Force and their German counterparts. He described the equipment as modern-day tools that will enable the police to carry out their operations easily.

He thanked the German Charge d, Affairs for the gesture and gave assurance that the equipment will be used for the intended purpose. He reiterated government’s commitment to improving the standards of the GPF whilst calling on the police to exercise their duty in a professional manner.

“We are public servants and we should be accountable for that. All this equipment can be available but if we don’t earn the love and respect of our people, we can’t do anything,” he said. He called on the police to respect the rule of law and respect the rights of the citizens.

Representative of the German Charge d, Affairs, Madam Gabriele Boner, said Germany has been working closely with The Gambia since 2017. She added that the German government is committed to supporting security sector reform in The Gambia.

She expressed confidence in the force, commending them for the good work done during the December 4th election.

“The Gambia Police Force has exercised professionalism in the past presidential election,” she said. She tasks the Police who are the beneficiaries to make the best use of the equipment.

Delivering his speech, Martin Feigl, Baden-Wurttemberg State Police, German Police Support Team said The Gambia and German police have common responsibilities, noting that the role of the police in maintaining democracy is crucial. Adding that they (Police) guarantee the citizens of their rights.

“This year Germany will invest about 45 million dalasis in buildings, equipment and training for The Gambia Police Force. Our German trainer-teams are looking forward to training in Specialized Intervention Unit, Traffic Police, Crime Scene Management, Leadership Management, Community Policing and Sexual and Gender-Based Violence,” he said.

“Your work as policemen and women is extremely important for society and democracy.”

“Speaking on behalf of the Interior Minister, Gibril Ngorr Secka also highlighted the importance of the donated equipment, noting that it will enhance the operational capacity of Gambia Police Force in the area of public order management among others.

“We are profoundly grateful to the Federal German Government for their continued support during these past years of a very challenging transition period.”

Since the project inception in 2018, the German Trainer-Teams have trained roughly 800 police officers and invested over 96 million dalasis.