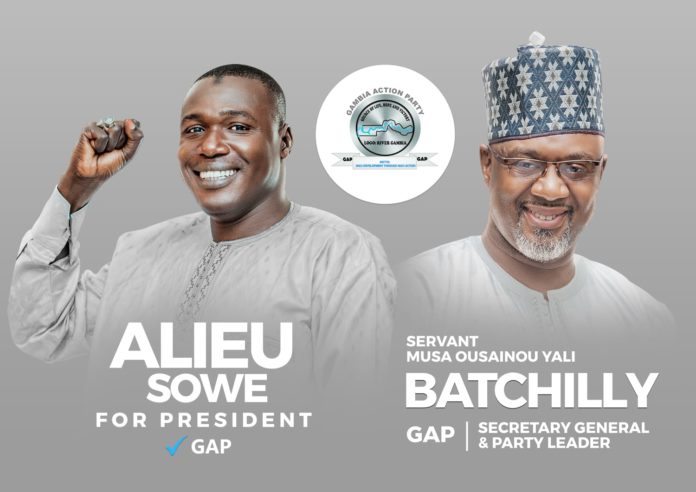 Opposition Gambia Action Party has dismissed reports it was engaged in talks for an alliance with NPP.

Reports emerged on Wednesday the Musa Ousainou Yali Batchilly-led GAP is involved in talks for a coalition with President Barrow’s NPP.

But GAP in a statement, said: “On the strongest possible term, the GAP administration would like to clarify to the general public that GAP is established mainly to contest and participate in electoral processes in The Gambia. Forming coalition or alliance with NPP as claimed by Amat Tijan and further requesting for Gambia Action Party’s withdrawal from the anticipated coalition talks by another party leader (name withheld) is aimed to tarnish the party’s image.

“We wish to clear the public space that GAP is opened to conversations that will ensure the application of socioeconomic development gains in the Gambia, and we wish to clarify to the public that GAP and NPP has nothing common and are not in coalition talks. We are open to GAP led alliance with parties of similar visions to envisage national development plans.

“Our candidate will contest in December 4th Presidential election with or without coalition or alliance. We urge all the patriotic Gambians both home and abroad to refrain from derogatory comments that will serve as catalyst to create tension in the nation as we approach the elections.

“We are very much sure that our visit to the presidency was based on national development initiative undertakings as we took a representative of Thailand government who wish to invest in The Gambia. We would like to remind Amat Tijan that if meeting President Barrow means forming coalition with him, then Hon. Mama was the first opposition leader to met him in 2017.

“Our agenda is to ensure that The Gambia compete at the global economic front and that cannot be realized without sacrifices and efforts to convert the manifestos into workable policies.”