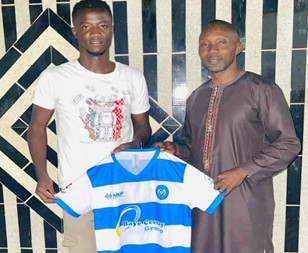 Gaira Joof, the erstwhile Gambia Under 23 striker who was playing professional football in Israel has snubbed Gamtel FC and Hawks FC by signing a contract with serial Gambian league champions, Wallidan FC on Wednesday.

The contract signed with the blue boys yesterday will see the 23-year-old attacker staying on till the end of the season.

“I am glad to sign this with Wallidan. I believe that I can help them to win the league and regain my fitness before my summer move”, the attacker told The Fatu Network.

Three other clubs — Gamtel FC, Hawks and the defending champions Fortune Fc, have all contacted Joof but he opted to sign for Wallidan Football Club.

According to the 23-year old attacker who has been battling a knee injury since March 2021, the passing of Hatib Njie, a renowned supporter of Wallidan urged him to sign for the team to fulfil his promise.
” I made a promise to him that I will play for Wallidan. This has been his wish. Now that he is not alive, I am ready to give all to the team to win the league for him.”

The speedy and dazzling attacker last played for UM Fahem in Israel where he suffered a serious knee injury. He played 11 games for them, scored 4 goals and got 3 assists.
He was very influential for the team before he went on to nurse an injury that will ruin his contract with them.
Wallidan currently sits fifth in The Gambia Football Federation Division One league. The blue boys will hope to finish the first round of games in the top five and fight the battle against Real De Banjul and Brikama United for the league trophy. The team’s acquisition of Gaira Joof will add more weight to their attack, but only if the former UM Fahem star repossesses his fitness.

Share
Facebook
Twitter
WhatsApp
Linkedin
Viber
Previous articleAmbassador Fadera Did Not Die of Poisoning; Coroner’s Report Reveals
Next articleOPINION EDITORIAL: Hello To The Gambia. Let’s Get To Work Together!